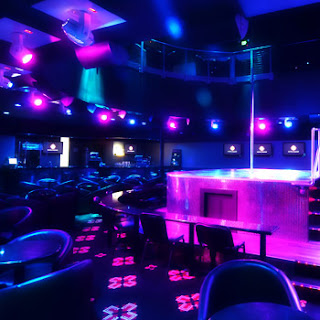 Mr. Shife said…
Hi Just Bob. You know a gentleman never kisses and tells, but since I am not a gentleman I can tell you it was not enough to get me a six-pack of Moose Drool.
Hi Red. Of course I am. I come from a long line of dorks. I can only imagine the dorkitude Kyle is going to harness when he is older.
7/13/2012

Jon said…
And now the tale belongs to the ages. I'd post my embarrassing stories too, but they're nowhere near as amusing as yours. Besides, I think my repression of them is coming along nicely.
7/13/2012

Jay Noel said…
I remember the first time I went to s trip club. And it was one of the more upscale establishments.

After about an hour, I was bored. And frankly, I felt a little sorry for the ladies. But I will admit, the first thirty minutes were pretty awesome.
7/13/2012

Mr. Shife said…
Yes indeed Jon, and it is going to get worse for me because I am working on something that is going to probably make my son hate me when he is older.
You are spot on Jay. The first time I went to a strip club was a magical night. Definitely an eye opener.
7/13/2012

kden said…
Oh Boy, you have led an exciting life. Years ago my husband and I went into one of those places where a girl dances and you're in a small room behind glass watching. It was weird and creepy and I couldn't wait to get outta there.
7/13/2012

john bain said…
We call them bouncers. No not the girls tits, the guys who threw you, I mean, escorted you out. Do you think doormen/bouncers know how to have fun?
7/14/2012

billy pilgrim said…
excellent story. i spent countless nights in similar establishments and had a friend who was obsessed with the fact that pole wasn't sanitized between acts.
7/14/2012

texlahoma said…
Great story! I think an even wilder story was what lead me to this blog.
Have a good one.
7/16/2012

Mr. Shife said…
No Silly Rabbit I was unable to make someone's fantasies come true.=) Plus it was really hard to move around in those Levis.
Hi ya Kden. I have been in one of those places too. I actually have a funny story about it but I will have to share it another day.
Hello Val. Nope they did not see my potential. Plus I think I needed to work on my cleavage.
7/16/2012

Mr. Shife said…
Hey Unplug the Hub. What is up? I have not met a nice bouncer yet. And we are still talking about the dudes and not the girl's boobs right?
Hey BP. There are a lot of things to obsess over in a strip club but I don't think I have ever worried about the overall cleanliness of the pole. Then again there is a reason why it is so dark in there.
Hello Texlahoma. Glad you liked the story. So now I need to know what led you to my blog. Extremely curious.
7/16/2012

Dr. Kenneth Noisewater said…
outstanding story. i didn't know you were so nimble.

i can see how a boise titty club could be a little depressing, so kudos to you for perking up the joint.
7/16/2012

Mr. Shife said…
Yes Dr. Ken I am quite the acrobat. You should see me on the pommel horse. I didn't mention in the story but Boise does not allow nudity so it is basically a bikini bar so yes indeed I needed to make that place happening.
7/16/2012

texlahoma said…
Mr. Shife - I wish my memory was in better shape. That story started with a lot of alcohol being consumed
(I actually thought it was going to be the same story) I think it involved a pickup, maybe hitchhiking and traveling quite a long way and a lot of crazy stuff that I can't recall.
7/21/2012