How I Lost Hayden

on December 06, 2013
Or perhaps the title should be "How Hayden Escaped the Shifley Compound." Either way, her daddy (that would be me) got a big, fat F this past Sunday in daughter watching.
We are fortunate that our back yard opens up to a school yard so we have no neighbors behind us, and when school is out we can unlock our gate to let the kids go out to play on the playground.
Mrs. Shife took the kids and Tank out to play on Sunday while I watched my favorite football team, the Arizona Cardinals, lose another game and make me want re-create a prison riot scene. I felt the urge to break some stuff, set toilet paper on fire, shout Attica, and hold prison guards hostage. Since we do not share our domicile with any prison guards that I'm aware of, it's usually Kyle and Hayden's stuffed animals that get duct-taped to chairs until my demands are met.
I think my demands to the Cardinals are pretty simple: don't suck. Unfortunately, my demands are rarely met.
I think I should probably quit watching football.
Anyway, Mrs. Shife brought Hayden inside because she was cold, wet, and hungry so I paused the game to take care of her. She also brought Tank in too because there was some possible workplace harassment going on with some other dogs in the neighborhood as someone was getting a little too aggressive with their butt sniffing.
Hayden wasn't too happy about her play time being over ( I think she actually saw the score of the game and had sympathy pains for her dad) and wanted to go back outside with her momma and Kyle.
I was able to calm her down, and stripped off her wet clothes so she was just down to her diaper, shirt, socks, and fed her some noodles. I also put the dog door cover on because she would crawl through the door to get back outside if she had the opportunity. 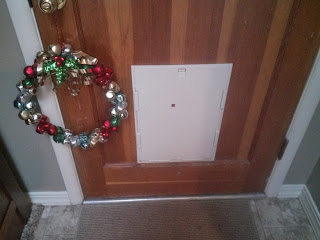 Tank was also itching to go back outside because he heard some rumors that there were squirrels making disparaging remarks about his mother.
Those squirrels can be real dicks.
Hayden finished eating and headed to the back door to figure out how she was getting back outside.
I was down in the hall in my bedroom working on my rhythmic gymnastics routine.
No I wasn't watching the game as it was over.
I swear.
I'm not sure exactly what I was doing but I wasn't paying attention to my daughter because when I came back out to check on her, she and Tank were gone.
She had taken the dog door cover off and headed back outside with her furry friend. 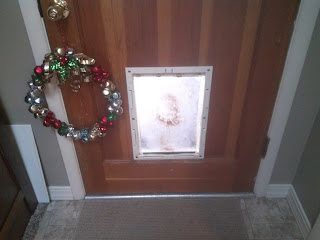 The Shifley dog door without the cover.

By the time I got outside to find her, she had made it to the school yard in just her diaper, shirt, and socks to her mother, and I got the WTF? look from Mrs. Shife as she handed me back Hayden.
So how was your Sunday afternoon?
Thanks for stopping by.

P.S. As you may have heard the actor Paul Walker passed away earlier this week. His movies never were on my must-see list but as far as I can tell he seemed like a pretty good dude who used his fame and fortune to champion some worthwhile causes. However, his death did shake me up a little bit because my most popular post ever is titled, Paul Effin' Walker, and I was actually reading it a day before I learned about his death. It has nearly 10,000 page views while my second-most popular post has about 3,000. Anyway, I never knew the guy or was his biggest supporter but he'll be sorely missed by many and my thoughts and condolences to his family, friends, and fans. Rest in peace Paul Walker.


The song is ended but the melody lingers on. – Irving Berlin