on November 10, 2009
October 1 – Getting ready to take the Mania back to the Midwest for the first time. He gets to see the Cardinals play and some more relatives will meet the little wildcat.

October 2 – Off to STL. Baby Shife slept through most of the Cardinal game but we had fun and he was a big hit with all of the people around us.

October 5 – We have to spend some time driving around in the car to help Baby Shife fall asleep. I think it is mostly due to all of the excitement and over-stimulation because we never had to do this at home.

October 6 – Heading back home to Boise. A long trip as we have to drive 3 hours to STL then spend another 7 in the air, but the little man did a great job.

October 8 – Baby Shife got scheduled for his 6-month-old checkup and portraits. He also might be done eating apple sauce. For some reason it makes him really gassy and fussy which does not equal a great night for the parents.

October 9 – We had to get the wildcat some new clothes because it is getting colder out there and he does not have a lot of long sleeved onesies.

October 10 – We had to ditch some of the “organic” baby food because Baby Shife had another rough night with a tight belly. We are not sure if it is the food but the Gerber’s organic seems to agree better with his little tummy.

October 12 – Baby Shife is sitting up all by himself, and he is starting to pull himself up as well. We had to raise the crib rail up because it was too low and he looked like he was ready to crank out some pull ups. He is also grabbing stuff off of the TV stand so childproofing the house might be in order real soon.

October 13 – He has been fascinated with my remote controls so I gave him an old one and he seems to like it OK. I might break out an old cell phone and let him play with that as well.

October 14 – 6-month check up and vaccinations. He checked out OK, got all his shots, and seems to be heading in the right direction. He weighed just over 15 pounds and is 25.5 inches long.

October 16 – Taking him back to the mall to find some brown pants that fit him better and a few toys might jump in the cart.

October 17 – Baby Shife got to go to the end-of-season softball party and he tried his darnedest to get himself a beer but Mrs. Shife said no way. He did swig down some water.

October 18 – Baby Shife is definitely testing my gag reflex with some of the deposits I am finding in his diapers. With the switch to solid foods he has definitely taken it up a notch in regards to the stank factor.

October 19 – Baby Shife hasn’t made a deposit in his mud butt holder for two days so I think we are going to get a tsunami of baby poop heading our way real soon.

October 20 – He has been barely crawling the last few days but now he is buzzing around the living room like someone is chasing him with a cattle prod. My life will never be the same.

October 22 – The Wii had to put away because someone discovered it and wanted to put all the cords into his mouth. I am afraid he is going to discover the DVDs next. He has already tried to reprogram the DVR several times. I fully expect to have a couple of adult films charged to our account by the way he was pushing buttons that thing.

October 23 – Toy shopping again. Someone needs blocks to help with their hand/eye coordination.

October 24 – We are turning the TV room into a play room for Baby Shife so we have to some work to do next week after we get back from Moscow.

October 25 – Took Baby Shife to a Halloween Maize and a Pumpkin Patch. It was fine and dandy but the rookie parents forgot to bring the stroller so we had to use a wagon that was for hauling the pumpkins and had about 40 pound of mud caked on the tires. Good times. Another lesson learned.

October 28 – Baby Shife got dressed up as a little monkey to go along with Mrs. Shife’s Wicked Witch outfit for her Halloween office party.

October 29 – It is just amazing watching the little man play with things and try to figure out how they work. And it is the little things that keep him occupied like measuring cups, plastic bowls, and floor vents.

October 30 – Off to the Palouse for the weekend to visit Grandma and the rest of the crew.

October 31 – Baby Shife’s first Halloween and second Vandal football game. Not a bad way to turn 7-months-old if I must say so myself.

And here are some photos of the fat basset stalker: 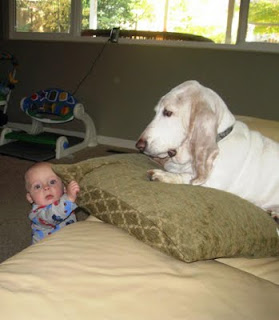 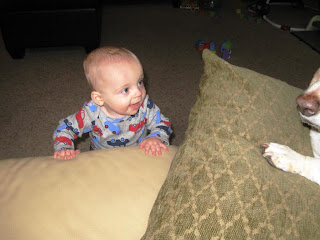 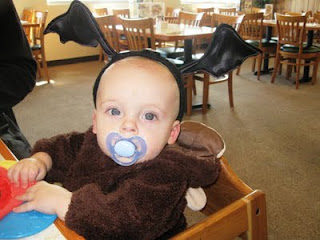