It is almost June so I better post something

on May 21, 2009
Wow. I am really getting bad at updating this blog of mine.
I have been busy.
I joined this new club where some of the amazing benefits include getting puked, peed, and peeped on by a little person. No it is not some sort of S&M German midget dominatrix outfit. It is just fatherhood.
Baby Shifley has been a joy but I am starting get a little nervous because Mrs. Shife goes back to work next week so it is just going to be me and the little man. I am not sure who is going to cry more - me or him.
We also have had non-stop visitors for the past few weeks so I had to put the No Vacancy sign in front of the house to give us a little peace and quiet and try to get Baby Shifley on a routine before we are home alone.
So what else has been going on?
Well that is about it. Pretty boring, huh? Hopefully once the baby and I get into a routine I will post more frequently. Hope everyone is doing well, and I guess I better include a baby shot for those of you interested in seeing my little buddy. 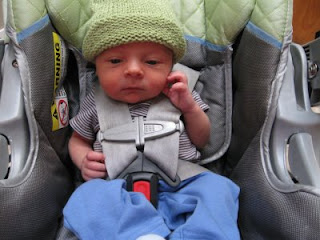