They come in threes 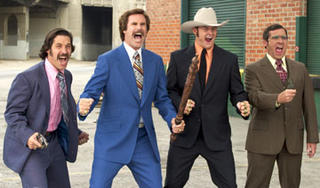 Well the final piece to the puzzle arrives Friday. The final cinematic treat to my summer film palate. There were three movies that I have been drooling over this summer, "Batman Begins," "The Wedding Crashers," and , play that funky music white boy, "The 40-Year-Old Virgin." Yes, I did not put "Star Wars" down, sorry brother-in-law, but my hard on for "Star Wars" movies died about 6 years when they released that garbage called "Episode 1."
So I am pretty jacked about the "Virgin." It has gotten favorable reviews and frickin' Steve Carrell is the man. For those of you who don't know who he is, he was the jerk newscaster in "Bruce Almighty" and he played Brick in "Anchorman," the guy on the right in the glasses in above picture.
Anyone who hasn't seen "Batman" or "Wedding Crashers" should do so immediately because they are both, to borrow a line from "Seinfeld," real and spectacular.
So Friday I will go forth and laugh at this virgin's antics with my lovely wife by side and give you my loyal readers all the details. Just the details about the movie of course. If my wife and I decide to go to no-pants town after the show then you will just have to rely on your imagination.