on February 02, 2022
First, a few belated cheerful wish to you:
Happy Lunar New Year!
Hopefully you celebrated responsibly.
I would expect nothing else from all of you glorious and glamorous folks.
So now it is the Year of the Tiger.
Meeeow!

Do you have a favorite tiger?
Tiger Mask IV is the current leader in my clubhouse.
Not familiar?
Well he is a Japanese professional wrestler. 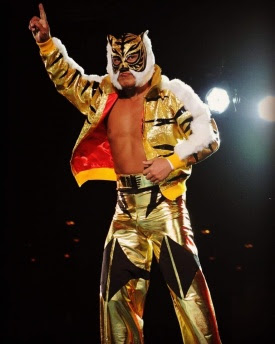 And now you know as much as I do about him.
Honestly, the favorite tiger in our house is probably Hobbes.
Mrs. Shife and the kids are big fans of his adventures with Calvin.
And now a terrible segue:
Happy Groundhog's Day!
Did you see the furry forecaster's prediction?
Color me not surprised that Punxsutawney Phil saw his shadow and we get 6 more weeks of winter.
Not cool, Phil.
But just like anything else, if you want a different answer, the Internet will provide.
Charles G. Hogg aka Staten Island Chuck emerged from his burrow to see no shadow and an early spring.
You're my boy, Chuck!
More predictions from other four-legged meteorologists:
General Beauregard Lee from Georgia - Early spring.
The General got promoted to Admiral Awesome!
Buckeye Chuck from Ohio - Early spring.
Chuck yeah!
Balzac Billy from Alberta, Canada - Six more weeks.
More like Buttzac Billy!
Fred la marmotte is from Quebec, Canada - Six more weeks.
Fred is dead to me!
Shubenacadie Sam is from Nova Scotia, Canada - Six more weeks.
Sam I am not happy with you!
Stormy Marmot is from Colorado - Early spring.
All hail Stormy! Long may he reign!
Wiarton Willie is from Ontario, Canada - Early spring.
Will he? You can bet his sweet Canadian ground hog butt he will.
Hope the rest of your first week of February goes well and I will talk to you later.
Since last week's duck butt bite was a hit, here's another GIF of a bird being a dick: