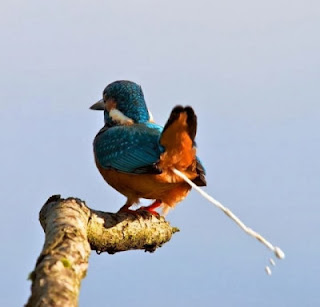 I am going to be crazy as a loon if a certain bird in our neighborhood doesn't quit crapping on our car.
Let’s call him Fred.
Fred has been hanging out on our side view mirrors for the past several weeks.
And to help pass the time while he’s hanging out, Fred likes to poop.
A lot.
I almost think Fred loves to poop.
I think this is what happens when the early bird gets the worm.
Fred has taken to pooping on our car like a duck to water.
We have a waterfall of bird shit cascading down our car doors.
It’s such a beautiful sight. 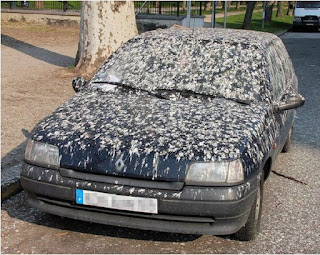 Forget getting your car waxed to make it shine.
Bird poop really makes that paint pop.
It looks like someone melted 17,000 white crayons, filled up a pitcher, and poured it over the car.
You would think a flock of seagulls had targeted our car with the amount of crap that has been plastered on our automobile.
I just assumed this because I heard birds of a feather flock together.
Is this a really bad version of Angry Birds?
Nope, it’s just Fred and his feathered fanny firing feces fanatically.
According to research, Fred is under the belief that his reflection is another male competing for his space.
Rather than peck at the mirror, though, he tries to run off the intruder by regularly – and I guess regularly in the bird kingdom means every 3.2 seconds – marking his territory – and by marking they mean it looks like someone smashed open a bird poop piñata on the side of our vehicle.
According to more research, Fred’s behavior should stop when he has found a mate and nesting season begins.
And I will be as proud as a peacock when Fred is happy as a lark doing the no-pants dance with his lady friend.