on November 25, 2016
Hope you had a wonderful Thanksgiving.
Most of the visitors to the Casa de Shifley 2016 turkey day extravaganza were really thankful for modern medicine.
Mrs. Shife had an allergic reaction to something that led to an "awesome" rash all over her body.
I decided to add a sinus infection to my to-do list this week.
And my sister-in-law either has strep throat, the flu or is going through heroin detox. We are pretty sure it's strep but you never know about her. After all, she is the one who saw me in my thong underwear.
So what's new with me?
Well, my wonderful Aunt Kathy mentioned that the Seattle Times was looking for holiday cooking horror stories and I should submit a Thanksgiving story that happened at her house a few years ago.
I did and they published it.
Here's the link or you can just read it below.


Twas the night before Black Friday, when all the through the abode
The labs were stirring, even the one from a different zip code.
The vomit was projected by the back door with unrestrained care
In the hopes that someone would arrive soon to help their despair.
The adults and children were all startled out of their beds
As visions of WTF danced in their heads.
And as we released the dogs to finish their puke attack
We soon discovered they had more to do than just yak.
When out on the lawn the labs began to seek sweet relief
Everyone watched with curiosity that soon turned to disbelief.
Like a flash, it came out of their rears
A black toxic sludge that had them in tears.
The moon on the breast of the new-fallen snow
Gave a luster to these horrible objects below.
When what to our wondering eyes did appear
A trail of oil from the turkey fryer used downstairs by the family’s engineer.
We now knew why the labs were to the door so lively and quick
They had in a moment been led astray by the temptations of a turkey oil slick.
This Thanksgiving was one for the ages,
Now it was time to find the carpet cleaner in the yellow pages.

There were a couple of close calls but, fortunately, no incidents with the newest lab in the family.
Ms. Frizzle just had a few pieces of turkey and called it a good night on her first Thanksgiving. 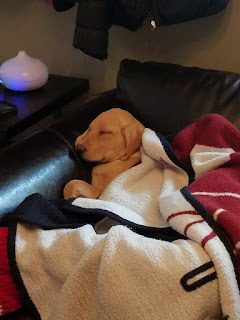