The Week That Was In Photos

on August 26, 2016
Hello there friend. How are you? I'm great. Thanks for asking.
We had a pretty good week and we were able to capture a few of those moments with our phones. And I thought I should share them with my awesome blogging pals.
Aren't I the best?

First we went to the fair.
It's a love/hate relationship.
Mrs. Shife and I hate it, but the kids love it.
I think the title gives it away, but check out Hayden doing her thing.
She figured out the back flips all by herself and then she tried to do 3 of them but just didn't get up high enough. 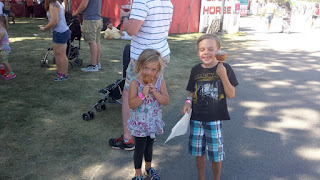 Kyle a.k.a Toothless was happy to close out the fair adventures with a caramel apple. He lost two choppers in the last two weeks and for some reason Hayden got shy. I also feel kind of bad for taking this picture because it looks like we interrupted a photo shoot. It's hard to see but I put a red arrow in the photo below next to what appears to be a male model getting ready to take some action photos. Sorry Zoolander. I hope we didn't ruin your chances to be Mr. August in the 2017 Men Of The Western Idaho Calendar. 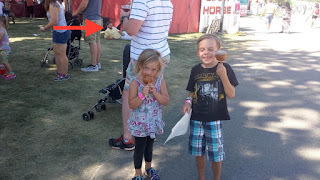 Then we started school. Can you guess who was happy about someone going back? 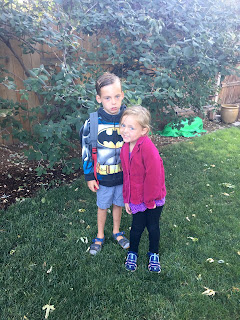 Kyle wanted summer to "last forever" and I don't blame him as he had a pretty awesome one. Hayden will definitely miss her brother while he's at school after a few weeks, but she seemed more than OK with the idea that she was going to be home alone with just Mrs. Shife.

Finally, Kyle got to practice reading to his new buddy, Oakley. 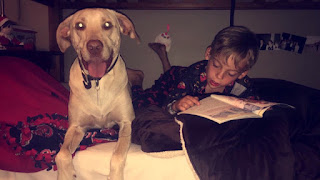 One of our babysitters brought over her dog and Kyle wanted to read to him. It looks like it went OK.

Well that's it. Thanks for stopping by. Have a great weekend and talk soon.