on July 08, 2016
Not you, my beloved blogging friends, but the person who coined the phrase:
"Don't cry over spilt milk."
Well I have something for you.
Now where did I put it.
I just had it.
Oh there it is ...

Those fingers are meant for James Howell.
Yes, that James Howell.
You know, James Howell, right?
Me neither until about 5 minutes ago when I looked up the origins of "Don't cry over spilt milk" and evidently he's the man who gets to deal with my scorn.
Plus, sullying the name of James Howell has been on my bucket list and it's about time that I finally get to check that box.
According to the internet - which we know is never erroneous - the saying "don't cry over spilt milk" is an age-old proverb that has been around for hundreds of years. The first historical reference to the phrase appears in a document written by British historian James Howell in 1659.

Why am I upset about the aforementioned phrase?
Let me tell you all about it.
We went away for the 4th of July weekend and the car got dirty.
Not in a "talk like a sailor kind of way" but just lots of bug guts and grime from traveling on America's beloved Interstate 84 (I-84), which is an Interstate Highway with two non-contiguous sections in case you were keeping score at home.
We got home late Monday and taking care of the car got postponed to Tuesday.
Tuesday was pretty busy.
Not as busy as a one-armed bus driver with a fresh case of crabs, but pretty darn close.
I was finally able to get the car washed about 10 pm at a gas station car wash.
Not my first choice but you don't have a lot of choices when you wait until 10 pm.
The reason why it was late before I could clean up the car because I went to the gym then the grocery store and the next thing you know it's time for the late local news.
I could have and should have waited until Wednesday to take care of the car.
Unfortunately, I have a touch of OCD and the car was getting washed Tuesday.
And it did.
As far as I could tell, the exterior and the interior looked pretty good.
It was, as I mentioned, 10 o'clock at night, which drastically reduces my reliability meter when it comes to determining the cleanliness of automobiles because it was 10 o'clock at night and it turns out that it gets dark at night.
I heard that whoever said, "For the love of fat bassets, just get on with it Mr. Shife."
I am just dragging this one out, aren't I?
Anyway, I get home and head over to the passenger side to get the groceries.
And I guess there was a sudden and powerful shift in the moon's gravitational pull that only affected the passenger seat of my vehicle because the groceries moved.
Especially a large container that was home to an opaque white fluid rich in fat and protein.
I opened the door and a gallon of milk came flying out.
The milk then proceeded to bounce off the driveway and seemingly spin in the air while it shot milk in one direction and one direction only ... the interior of the car.
Milk was everywhere.
It looked like Jackson Pollock decided to paint his latest masterpiece in the car with milk, which would be really weird because he's been dead for 50 years.
It might be weirder that I made a Jackson Pollock reference on my blog. 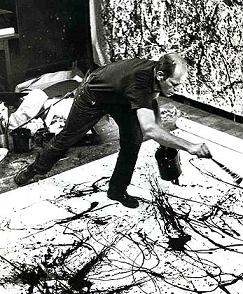 Maybe this would have been a better reference.

You get the idea.
I cried over spilt milk.
Especially in the morning when I was able to see the damage that was done in the light of day.
Thanks a lot, James Howell, for making me feel bad about crying over spilt milk.
Did I mention that have something for you?
Now where did I put it.
I just had it.
Oh there it is ...