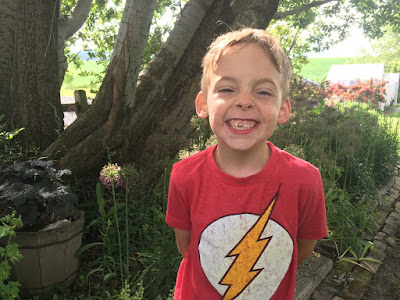 That's my boy.
Evidently his aunt knows the secret to get him to actually smile for a picture because me and Mrs. Shife usually get the look below when we take his picture. Maybe they are just embarrassed because their father looks like a photo bombing pervert.
Man I totally look like Chester in this one. 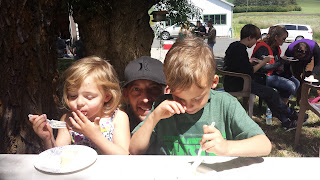 Well good news Mr. Rosewater as it's another week of Kyle news.
He had a pretty big week and I wanted to share all of it. 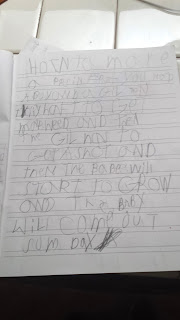 It's a little tough to read and I have to make some assumptions because he hasn't quite mastered the art of spelling but this is what I think he wrote:
How to make a person. First, you need a boy and a girl. Then you have to get more weed and then the girl has to get a shot and then the baby will start to grow and the baby will come out some day.

I know it's troubling, right? What a run-on sentence. I might have to ground him. =)

I haven't asked him yet, but I'm not sure why you have to get more weed. I assure you it's not marijuana because unless he's heard some stuff on the playground, I don't even think he knows that word and Mrs. Shife and I don't partake.
Just interesting seeing how things get made from the perspective of a 7-year-old.
I just got confirmation from Kyle that he was trying to spell married.
Now it's really funny. Oh my.

That's all for this week. Thanks for stopping by.