on April 01, 2016
For reading my blog for 31 days, you have earned a free, extra-special blog post at no extra charge.
Way to go, friend.
Yay you!
Please take a moment to pat yourself on the back.
Come on. Do it. We are all waiting.
Thank you.
It wasn't that difficult, was it?
OK. This isn't an April Fool's prank.
Well sort of.
There's is only going to be one day of April Antics as I will return to updating my blog weekly next week, but I just had some more cool stuff to share that I couldn't wait until next week.

First, I didn't have a chance to include this look of excitement on Kyle's face when he beat the game he has been trying to beat at Red Robin since they put those personal little kiosks at the table.

Second, I went to work today and was escorted by two wild turkeys. It's not unusual to see wild turkeys in Idaho, but not something you would expect to see in downtown Boise. I don't know if someone dropped them off as an April Fool's prank, but I think it's a sign from the universe that I'm awesome and I will have a wonderful rest of my life. I mean being escorted by wild turkeys has to be  good, right? And I apologize for some of the photos as the sun was in the way - damn you star that provides light and hear for the Earth - but I felt like TMZ stalking a celebrity as I was just snapping photos all the way to work. Hopefully those turkeys ended up where they wanted to be.

Finally, a picture that is not animated. It's just a picture of the dishwasher at work with a running magnet on it. Do you get it yet? Our office manager is an amazing guy, and he used to put a paper towel over the handle that had the word "Running" written on it to help people understand that the dishwasher was in use. Well I thought it would be pretty funny if I could find a magnet of a person running for our office manager because he's amazing remember and he could just throw that on the dishwasher when it was in use. I found one, and everyone did think it was pretty funny.
I do have my moments. 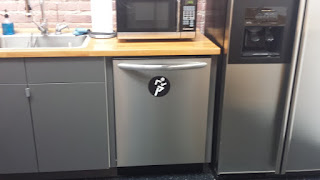 Thanks for stopping by. Happy April and have a lovely weekend.