on March 12, 2016
Howdy folks.
Hayden took advantage of the brief sunshine we had today and went outside to play.
It's always a joy to see what kind of outfit she will throw together. 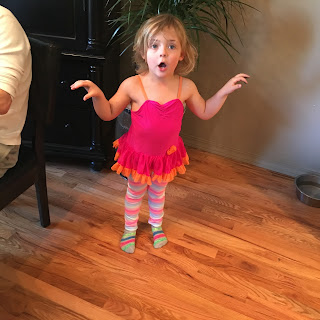 Struggled with a topic today, but then I was inspired by a trip to the convenience store.
Parked in front of the Redbox and saw an image for Bill Murray's latest movie "Rock the Kasbah."
I love Bill Murray, and I will watch him in almost anything.
But I just couldn't pull the trigger on this train wreck of movie.
It looked awful.
Not as awful as smelling a fully-loaded burnt diaper covered in body hair, but close.
Then as my mind does it went off in a weirdo no longer with a beardo direction.
I thought about the Meatloaf song "I'd Do Anything for Love (But I Won't Do That).
Are you familiar?
It just made me think that Meatloaf or whoever wrote that song must not have been married at the time because if they were in boyfriend mode - and things were serious - they would almost certainly do anything for love.
Am I right?
Us dudes will do just about anything to make our ladies happy especially if that anything leads to a pass on the playground if you know what I mean.
If Mrs. Shife asked Mr. Shife the boyfriend to watch the six-hour BBC version of "Pride and Prejudice," I can guarantee you what I was doing for the next few nights.
However, if Mrs. Shife asked Mr. Shife the husband the same question, I can guarantee you I would be belting out some Meatloaf lyrics.

P.S. I talk a big game, but you know I would do anything for her. She's my life, and I wouldn't be much without here.