Scared is the word I would use to describe this year's Thanksgiving.

I got a phone call from my Dad on Wednesday that stopped me in my tracks.
I could hardly understand him and he just kept telling me that he was in the hospital.
I honestly thought he had a stroke because his speech was so slurred.

It turns out he was loaded up on morphine and that's why he was sounded like he had just shotgunned 27 beers. He also sounded a lot like Harry Caray during the 8th inning of a Cubs game. My Dad got chuckle out of that because he's a Cubs fan and he grew up listening to Harry Caray.
In case you are unfamiliar with Harry Caray, he has a pretty good reputation for hitting the sauce and being smashed by the time game was over.

The reason he was on morphine is because he was in an incredible amount of pain as his legs had swollen up and couldn't walk. After running a bunch of tests, the doctors think he has something called Wegener's granulomatosis. I had never heard of this disorder before but it's kind of scary because it's life threatening as it restricts blood flow to your organs among other things.

The doctors are hopeful that they caught this early enough so my Dad doesn't have serious damage to his kidneys, but it's still early to tell.

I was scared for the obvious reasons but talking to my Dad brought back some horrible memories as I had talked to Rusty my biological father about 10 years ago when he was pumped full of morphine. Rusty was on his death bed as he was succumbing to alcoholism and I tried to have a conversation with him. It was a pretty one-sided talk as Rusty was too doped up to make any sense. My Dad wasn't that bad but it was still difficult to understand everything he was trying to say.

Needless to say, I am extremely thankful that my Dad is getting the medical care he needs and he still hopefully has a lot of years left in him. I'm not ready to say bye to my Pops.

He came into my life when I was about 5, and I have no idea what kind of life my Mom and I would have had without him. And ever since he was in my life, he never made me feel like anything but his son. There's a song by Brad Paisley called "He Didn't Have To Be" that is eerily similar to my Dad becoming my Dad. When I first heard that song, I bawled like a baby. 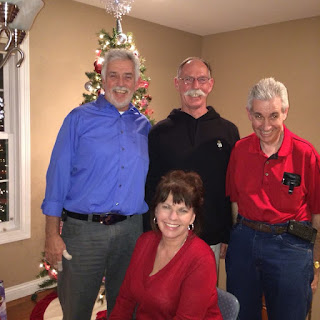 Here is my Pops with his brothers and sister. He is the handsome dude in the purple.