Roseburg On My Mind

Which is quite disturbing because I believe that small town in Oregon would definitely make the top 3 of my least favorite places I have lived.
I should also say that this recollection is neither interesting or funny.
Now that I have lured you in with those statements, let the fun begin.
Here's a horrible picture of a map to give you an idea of where this place exists. 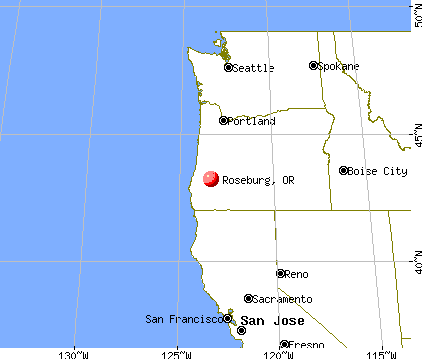 Isn't it lovely?
I lived there about 6 months and by my estimations that was 179 days too long.
The first day was OK but it was all downhill from there.
It was my first job after college working as a sports reporter.
It wasn't a good fit.
I missed my friends, I missed Idaho but mostly I missed Mrs. Shife.
I tried to make it work but ... spoiler alert ... it didn't.
It was definitely them and not me.
The final straw was when I locked my keys in my truck.
I had to walk about 3 miles back to my apartment to get my spare key.
I said "This town can eat a bag of dicks"every single step of the way.
By the way, you can order a bag of dicks in case you were interested.
I was not happy.
I just felt if I was back home in Idaho this wouldn't have happened.
Sure I could've locked my keys in the car but I would have been able to call a friend to help me out.
I was looking for a reason and that was a good enough one for me.
But when I was making that 6 mile round trip I realized something else.
I should have gotten an engineering degree.
Kidding.
But I did have a serious thought.
I should have known better after my first experience with Roseburg.
Before I got the job, I had to interview for the job so there I was in this small town in Central Oregon in a small hotel room wandering what I was going to do with my life.
I was also preparing for the interview.
And by preparing I mean drinking beer and watching "Point Break."
I realized as I was getting my stuff together for the interview the next day that I forgotten my dress socks so I headed over to the mall to remedy that problem.
I went into a department store and asked a female employee for help with some dress socks.
She asked me what color.
I assumed some variation of khaki to go with my khaki pants because I thought your socks should match your pants but then I thought to myself, "What do I know. I'm a dip shit. Maybe this town is a fashion mecca."
So I just told her that I needed socks that matched khaki pants.
She suggested white socks. 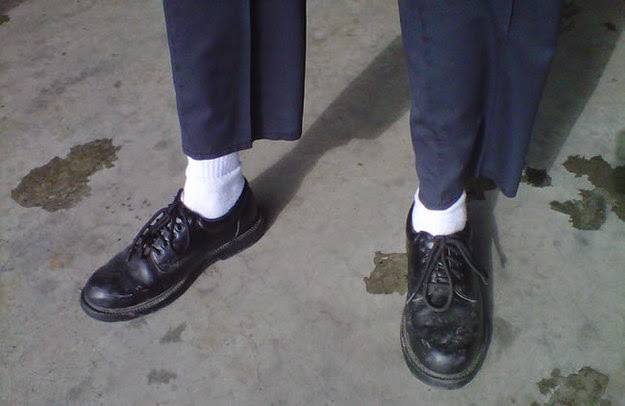 I couldn't find a pic of khaki pants with white socks but you get the idea.

I have never been accused of being a fashion maven but I know a thing or two, and one of those things is wearing white socks with my khaki pants is going to look kind of stupid.
I went with the socks that matched my pants and I got the job.
Well there it is.
The reason I moved to Roseburg and the reason why I finally left.
Now if I could just figure out why I have Roseburg on my mind lately.
Maybe it's because I just locked my keys in our car.
Have a good weekend.