on September 05, 2014
In a few years Kyle and Hayden might find it hard to believe that I was actually a teenager once – but I will assure them that I was – and this story is about something that happened during those awkward and formative years. Dislocating my finger last month helped this memory surface and I’m proud to present confessions of a dumb, white teenager.

High school can be hard enough but if you are truly lucky, you will find ways to make it even more difficult.
I was truly blessed on this day.
First off I was the new kid in school as we had just moved from Alaska to Idaho.
Then to add my misery, it was P.E. class.
Besides being the new guy, I was also 15 and not fully mature.
And by mature, I mean I was still waiting for the pubic hair fairy to pay his final visits because there were still some bare spots on the yard if you know what I mean.
Good times.
Even better times when you have to take a shower after P.E. with a bunch of other guys, who based on their facial hair, hit puberty at 7.
SARCASM ALERT à Of course boys would never tease other boys about their shortcomings like a lack of hair down there à SARCASM ALERT OVER
So I really didn’t look forward to P.E. class.
Another reason I wasn’t a big fan was because our P.E. teacher could care less about the class. He would just leave the equipment out that we were supposed to play with and then head to the top of the bleachers to enjoy his coffee and newspaper.
The activity for this wonderful day was the most dreaded of them all, dodgeball. 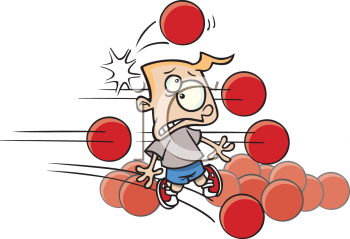 It was the seniors and any junior on the varsity football team against everyone else.
For the sake of storytelling we’ll just go with seniors instead of SAAJOTVFT.
The seniors got all of the yellow balls first and then headed to the gymnasium’s half-court line to begin pummeling us with no regard for our health, welfare or cries for mercy.
It was like they just got a pep talk from Johnny’s sensai in “The Karate Kid”: “Mercy is for the weak. Do you have a problem with that?” 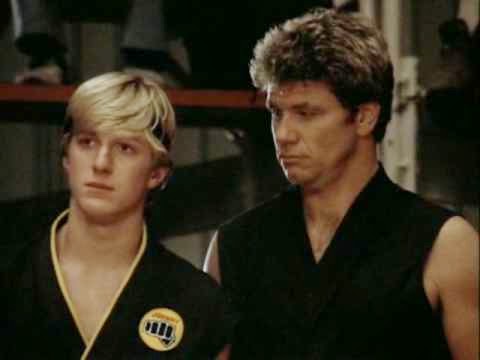 They did not.
The first wave of balls came at us as like wuss-seeking missiles and it was a target rich environment.
We were all spread out against the back wall praying to whatever deity that was listening and hoping that we had not been the chosen one.
If you had somehow caught the senior’s eye, you got their undivided attention and their mission was to beat you like a piñata with those dodge balls.
The first poor bastard caught in the senior’s fury fell for one of the oldest tricks in the book.
As Admiral Ackbar from Star Wars said, “It’s a trap.” 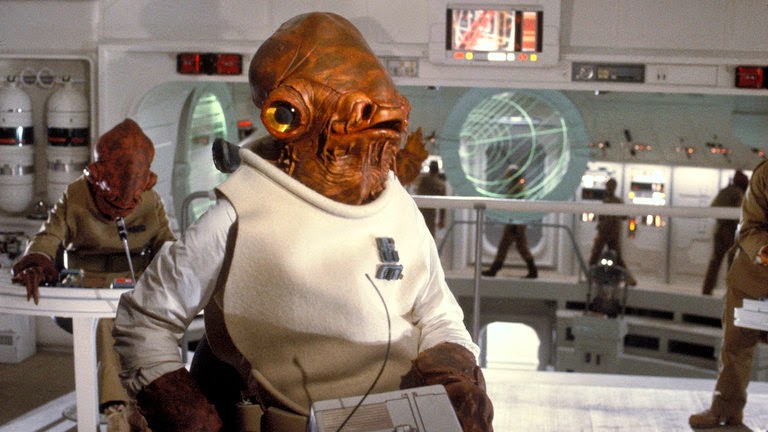 They toss you a nice, easy one and play into your desire to be the hero. As you are gazing upwards preparing to make the big catch, a horde of balls is sent your way from a multitude angles taking you down like a lion on a wounded gazelle in the Serengeti.
The gazelle in this case was a guy named Steve.
He was thrown a nice, soft ball and before he had a chance to grab the ball in his hands, the seniors had fired away catching the kid in the most sensitive of areas.
The balls had nailed his balls.
He went down faster than a soccer player taking a dive in the penalty box during the World Cup. 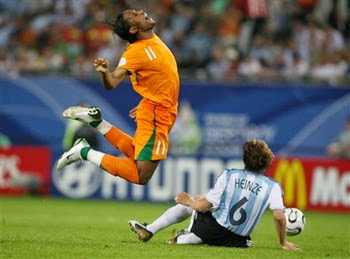 After writing in pain, he eventually harnessed enough strength to seal crawl off the floor to the locker room.
Our numbers kept getting smaller and smaller as the seniors picked us off one by one.
Eventually there were only a few of us left so it was time to take our beating because it was going to happen one way or another.
No pain, no gain, right?
All 5’7” and 100 pounds of me ventured out from the friendly confines of the back wall to face the balls and get my thumping. As I waited near the free throw line for the ball tsunami to commence I suddenly felt something I hadn’t felt before in dodge ball: courage.
I don’t know if my fight or flight genes decided it was time to cowboy up but I was ready to get it on like ping pong.
Game on seniors.
The first ball missed wide.
The second ball whizzed over my head as I ducked.
The third ball went between my legs as I jumped.
Then I caught the fourth ball.
“Holy shit” I screamed inside my head.
Then I got drilled by the fifth, sixth, seventh, eighth and ninth balls.
But I caught a ball.
Unfortunately the victory was short-lived as I looked down at my hands.
The ball was coming in so fast that when I went to cradle it in my chest it bent both of my thumbs back and jammed them.
It hurt but I didn’t think it was much of a problem until I went into the locker room to shower and change out of my gym clothes.
When I was in high school my pant of choice was the Levi 501s button fly jeans. If you are not familiar with them here’s a picture,

You know what’s really hard to do with two jammed thumbs? You guessed it. Buttoning up those damn pants.
You know what’s even harder to do than that? Being the new kid and asking some dude you barely know to button up your pants for you.
Good thing I discovered some courage that day.
I ended up asking Steve because he was so distracted by his recently-acquired case of elephantitis of the balls (Do not, I repeat, do not do an image search of elephatitis of the balls) that buttoning up the pants of the new kid in school was the least of his problems.

Thanks for stopping by. Enjoy your weekend.