on June 06, 2014
I ran into a friend from college at the grocery store recently.
It had been awhile since we last saw each other so we chatted for about 10 minutes.
I would have lasted longer but I needed some fresh air.
Let me explain.
As the conversation began, I noticed an extremely ripe body odor lingering in the air.
It felt like a hobo's fart had decided to camp out right under my nose.
Naturally I assumed it was me because I barely remember to brush my teeth some days so forgetting to put on deodorant seemed about right for this dumb, white guy.
While listening to my friend talk, I attempted as discretely as possible to sniff my underarms.
First, I pretended that I needed to scratch my face by raising my arm up then rubbing my cheek on my shoulder.
This technique allowed me to take in a big whiff to see if I indeed was contaminating the air.
No odors were detected so onto the next attempt because I wasn't convinced I got a good smell.
I crossed my arms and stuck my fingers in the armpit region so I could rub my fingers around.
Then I uncrossed my arms and pretended I needed to scratch my nose which would allow me to smell my fingers.
I did my best to not look like Molly Shannon's Mary Katherine Gallagher character on SNL.
Do you remember her? (I wasn't as dedicated and only rubbed my fingers over my shirt.)

The fingers didn't smell like a turd covered in burnt dog hair.
Awesome.
One more test.
I mentioned to my friend that my shoulder had been bothering me today.
Must have slept on it in a weird way I said.
Better stretch it out I said.
I raised my right hand over my head and bent my elbow to place my right hand behind my left shoulder.
Kind of like this: 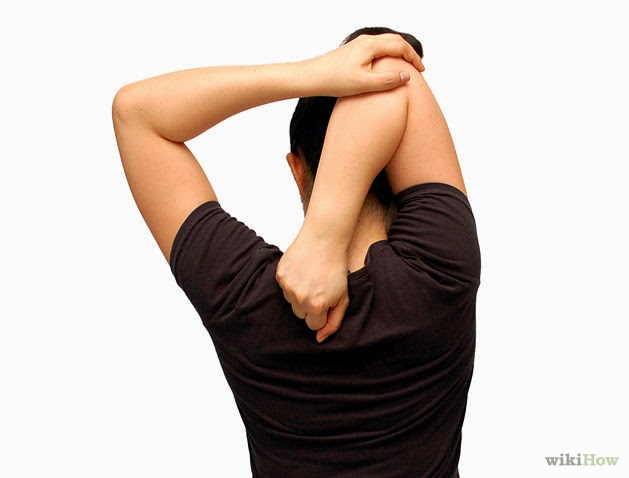 I turned my head to the side as an imaginary cough appeared out of nowhere.
Damn you fake, dry air that I just pretended to inhale.
I fake coughed.
I breathed in through my nose.
Nothing.
What the hell?
Then it dawned on me.
I didn't stink.
My old friend was the one who smelled like hot garbage.
When I realized this, the smell became 100 times worse because I knew it wasn't mine.
It's like thinking you stepped in mud but then you get home and discover it's somebody's poop.
In my entire life I have never wished for a stuffy nose but at that moment I was begging for one.
Oh the horror.
It's funny how the mind works.
Now that the noise corruption conundrum was solved it was time to end this talk because the odor was too much.
What could I do?
Punch myself in the neck? No. Too weird.
Punch my friend in the neck? Nope. Too mean.
Pretend I got a phone call? Nada. My cell phone was in the car.
Pee my pants? Negative. Too embarrassing. I have my limitations.
But that got me thinking.
I said, "Hey Smelly (names have been changed to protect myself from getting into trouble) I need to run to the bathroom. Sorry man I just can't hold it like the good old days."
We shook hands, said we would be in touch (which we never did), and I was on my way to the men's room to pretend to be pee.
As soon I was out of sight of Smelly, I felt like a swimmer who had had been holding his breath too long and camp up gasping for that precious air. 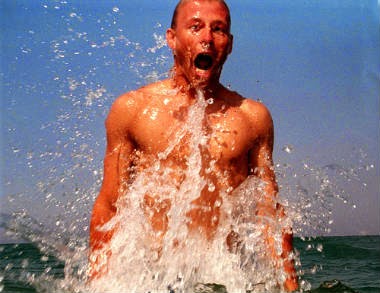 I found out later that my friend had gone more natural and holistic which is awesome if you want to smell like Bigfoot's dick.
So what's the moral of this little tale?
Sometimes those who dealt it don't always smell it.
And my friends stink.