on June 13, 2014
1) I started off the day by driving to work and then locking my keys in the car. As I was closing the door, time slowed down for just a few seconds so I could fully appreciate my moment of stupidity. As I watched the door elude my outstretched fingertips, I yelled "NOOOOOOOOOOOOOOOOOOOOO" hoping my Viking war cry (I might have mistyped girlish scream) would turn back the hands of time and erase my error in judgement.
Not on this day.
The door slammed shut with the keys still inside the car. Fortunately, we had a spare and Mrs. Shife saved my butt by dropping them off to me.

2) After that ordeal and work was done, I came home that afternoon to start my shift at Daddy Daycare. Besides looking after the kiddos, I needed to fix a broken faucet handle on a water line that was tied into our sprinkler system. I turned off the water to the sprinkler system and then removed the handle. Guess what wasn't tied into the sprinkler system?
The water line was off of the main water line so water was gushing up about 7 feet into the air and flooding the backyard.
Awesome.
After a few expletives, I thought this was no good and maybe I should fix it.
I attempted to put the handle back on the line but that worked about as well as an ejection seat on a helicopter. The water pressure was too strong and all I ended up doing was giving myself a nice bath.
The next step was turn off the water to the house.
I headed inside to get a flashlight so I could find the water line in the crawl space under our house.
Turns out we have plenty of flashlights but none of them work. Kyle had turned them all on so the batteries were dead.
Good times.
After a few more expletives, I continued to think this was no good.
But it's the middle of the day so maybe there's some natural light down in the crawl space and I can find the valve to turn off the water to the house.
Nope. It's really dark even in the afternoon under the house.
I remembered Kyle had a head lamp so I went back inside to borrow that but you'll never guess what happened? If you guessed the batteries were dead then you are familiar with 5-year-olds.
I searched frantically to find something that would emit light and the best thing I could find was this:

A light-up ball that I had to continuously hit to keep the light on.
Well this worked about as well as trying to nail Jell-O to a tree.
The only thing I discovered in the crawl space was that I cuss a lot when no one is around to hear me.
Wet, frustrated, and getting a little worried as the water had been going everywhere for about 10 minutes now, I went to the backyard again to try to put the faucet back on.
I probably would have had more luck putting lipstick on Tank.
I finally called the water company to ask them to send someone over to turn off the water.
Might of been a good idea to make this call in the beginning.
They showed up about 15 minutes later and turned it off.
Can't wait to see the water bill next month.

3) After my midday spa treatment, we needed to head to the hardware store to get the parts to fix the faucet so I had to change my clothes since I was soaking wet. I put on a new pair of shorts but neglected to change my underwear because they didn't feel that wet.
I should've stopped myself there since I've had such outstanding judgement up to this point in the day.
You won't believe it … I was wrong again.
By the time we got to the store I had rather large wet circle in the groin area that looked a lot like this: 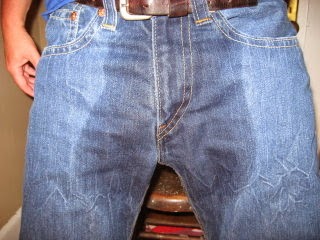 Kyle informed me and anyone else that was within close proximity of us at the store that I had peed my pants. When we go out we always try to point out where the restrooms are to the kids so we don't have an accident and of course my son kept telling me over and over (5-year-olds are persistent) that I should have found the bathroom in the store so I didn't pee my pants. And of course Hayden starts chiming in, "Hey Daddy, why did you pee your pants?" over and over (2-year-olds are persistent as well).

4) I figured three was enough but turns out Wednesday had one more punch to the face for me. Our neighbor's boy has just started watching the kids for us and I failed to inform him that the kids were good and didn't need any more food for the day. Kyle and Hayden took advantage of the sitter's lack of experience and my lack of judgement by gorging on an entire bag of dried mangos. According to Mrs. Shife, it was a feeding frenzy as the kids were going crazy when she got home.

Mowing them mangos down down like there was no tomorrow. Well it turns out that Kyle went a little crazier than Hayden and had too many mangos. By the time I got home he was in the bathroom with his face buried in toilet puking his guts out.

Thanks Wednesday. See you next week.

And Happy Father's Day to all the dudes out there. Enjoy the ride.