on June 21, 2013
I have written about many things on this blog.
Some good like my awesome kids or my amazing wife.
Some bad like ambushed paddingtons.
Some ugly like crapping my pants.
Well this topic is definitely going to fall somewhere in the bad and ugly range.
A bugly.
I have never spoken about her – and after reading about her – you might think I should have left her buried in the past with some other antics that I have not shared with all of you wonderful people that visit Confessions of a Dumb, White Guy.
Her name was Mrs. Epsteen and she has left a unsavory impression on more than a few people in the small number of years that she was out and about.
Here is a picture of the infamous Mrs. Epsteen showing off her hardbody in the glorious waters of the Pacific Ocean with one of her admirers: 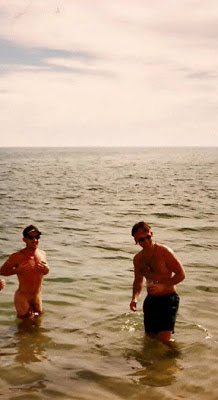 Yes you are quite sharp if you noticed that the guy wearing what could be mistaken for a dark brown speedo looks a lot like me because that is me, and that is me being Mrs. Epsteen.

If you are familiar with the movie The Silence of The Lambs then hopefully you remember the scene in which the serial killer – Buffalo Bill – does a little dance after he tucks his junk between his legs so he looks like he has a va-jay-jay. Well I decided to occasionally incorporate this dance into my drunken adventures during my collegiate years and eventually she became known as Mrs. Epsteen. I wish I could tell you what inspired the name or why she happened to be married or why the heck I would even do this in front of friends and strangers but I can't because I don't remember. The only thing I can tell you with the utmost certainty is that when I decided to transform into Mrs. Epsteen there was a tree stump in the Louisiana swamp with a higher IQ than yours truly.

She only appeared occasionally and usually late, late in the evening when I am sure my blood alcohol content resembled a horrible grade point average. Someone would talk me into it. And by someone I mean me. Then the next thing you know there are people running in the other direction as quickly as possible and looking as confused as a hungry baby in a topless bar as they could not quite comprehend what they just saw. I am sure there were a lot of WTFs?!?! uttered and then a search for the nearest eye-wash station. Eventually sober judgement and common sense prevailed so Mrs. Epsteen was retired. Turns out looking like an inebriated, moronic eunuch with superfluous fur was not a great way to make a first impression with anyone.

Mrs. Epsteen also appeared before the Internet was the Internet as we know it today so thank the fat bassets that there is not too much evidence of me being her out there. I do know there are a few pictures of Mrs. Epsteen tucked away - an extremely poor choice of words - so I have to be a nice guy for the rest of my days or another photo of her might surface and we certainly do not need that.

So there you go. Another skeleton from my closet brought out into the light, and boy was it an ugly one. Enjoy your retirement Mrs. Epsteen and don't ever come out of it.