My Life as a Pugilist Part 2

on May 23, 2013
I am a lover not a fighter.
I am not a big fan of fighting.
Maybe it is my temperament or the fact that I prefer my face the way it is.
Then again some people might think a few punches to my face might be an improvement.
But sometimes you gotta do what you gotta do and sometimes that means you gotta fight.
I have been in two fights.
Last week was about fight #1.
This week is about fight #2.


Fight #2 - College
I was in my mid-20s when fight #2 occurred. I didn't start my university experience until I was 21 because I spent some time in the U.S. Navy. Despite what you have seen on TV shows and the movies, sailors did not spend all of their free time engaging in fisticuffs at strip clubs. Of course we were at strip clubs but we just didn't bother with the fighting part. The rumor was that Uncle Sammy would not be too happy if you got into trouble with civilians so that was good enough to keep me and my buddies out of trouble and not add to my fighting resume.

I was enjoying my summer vacation in Moscow, Idaho - where I also went to school at the University of Idaho - working a summer job to help pay for college and trying to have fun on the weekends, which usually involved spending more than a few hours at the downtown bars. A nice thing about Moscow in the summertime is that there are about 12,000 less college students in town so the bars are not packed but there are still enough people in town that the bars are not dead. 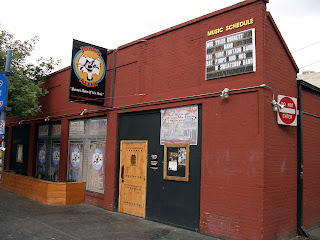 So one weekend towards the end of summer I was at a bar called John's Alley with a few of my fraternity brothers and a high school buddy of mine who came up for the weekend. It was getting late and the Alley was usually the last stop before you headed home to pass out on your hand-me down, beer-soiled and God only knows what else kind of stained couch. 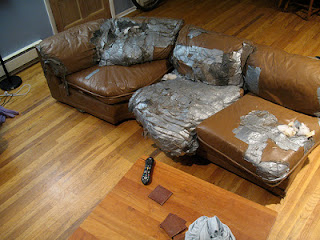 The Alley had a fairly decent crowd because they had a live band playing and it turns out that people seem to enjoy live music. I know crazy, huh? The band was playing a lot of covers and since I was in the obnoxious stage of my drunk that evening, I proceeded to stand in front of them and yell "Play some Poison dude!" or whatever butt rock band I could think of that moment.

The band was not impressed with my requests but my drunken, unsavory behavior did attract an admirer. I drank myself many things in college but gay was never one of them. Probably helped that I never tried Schmitts Gay. However, I must have giving off the vibe that night because this dude would not leave me alone.

He kept dancing by me, trying to grind on me, and just seemed really interested in taking me home for who knows what kind of shenanigans. It was a little unsettling because the last thing I imagine I am sending out on a Friday or Saturday night is the "I want to go home with a strange dude" energy. I think my chakras might have been jammed.

I tell the Grinder to leave me alone and go dry hump a bar stool. I am sure there was nothing polite about the way I told him either as I more than likely used some derogatory words if I had to wager a guess. Every time the Grinder would try his "I am going to charm your pants off" dance he would bump me and cause me to spill the most precious of items I had at that moment, my beer, and that is where I had the biggest problem with the Grinder. I was like "I know I brought sexy back to this bar but hey, careful, man, there is a beverage here!"

This one-way game of seduction continued on for another five minutes or so before we went straight to DEFCON 1. All my friends are sitting at a table in the back of the bar but they can see everything that was happening, and they got the highlight of the night about one minute later.

The Grinder made a tactical error as he was approaching me for the 24th time. As he was flailing his arms around like an angry toddler who vehemently disagreed with the assessment that it was nap time, he caught my hand and proceeded to send my large, plastic tub of brew into the air and tumbling to its death on the floor of the bar.

The line was crossed and the Grinder just entered a world of pain.

I pushed the guy. Maybe time has not been kind to my memory of this evening's activities but I swear I pushed him so hard that he went sliding across the floor about 15 feet. Then I ran over, pounced on top of him, and recreated the scene from A Christmas Story when Ralphie gets in a fight with the bully then starts shouting profanities non-stop as he lands blow after blow to the squealing kid. 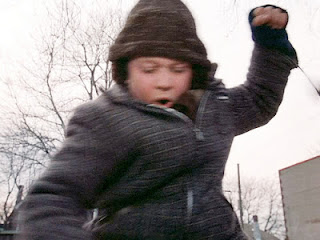 My friends rushed over and pulled me off the Grinder. Then we were escorted out of the bar by the bouncers. As we were walking home, my buddies gave me a hard time for beating up a gay guy. And my high school buddy told me when I mentioned this story to him again: "I do remember that. It was a relief to see you go to blows with that guy. Because at first, from a distance, it looked like you two were heading into the back for a different set of blows."

My friends were quite impressed with my fighting abilities so yay me, I guess.

Like I mentioned last week, every man has his breaking point and I found mine that night: keep your hands off my damn beer, man.