My Life as a Pugilist Part 1

on May 17, 2013
I am a lover not a fighter.
I am not a big fan of fighting.
Maybe it is my temperament or the fact that I prefer my face the way it is.
Then again some people might think a few punches to my face might be an improvement.
But sometimes you gotta do what you gotta do and sometimes that means you gotta fight.
I have been in two fights.
This week is about fight #1.
Next week will be about fight #2.

After PE in high school we were required to shower before going to our next class.
It was not a big deal as most of us just hopped in and out real fast because it would be a shame to mess up our perfectly feathered hair because –– as I am sure most of you know –– the ladies could not resist the big and often stiff hair wings on the side of a teenager's head.

I occasionally spot that endangered feathered hairstyle at a state fair. It takes me back. And reminds me to never, ever do that again.

Back to the story.

Now the PE locker room is small.
A community shower, two urinals, two sinks, a toilet stall and a few lockers.
The lockers were not too big and stacked on top of each other with a wooden bench that you had to share with a few other guys that were near your locker. 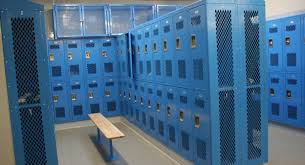 The problem with the bench is that when you were facing your locker there could be a guy behind you going to his locker, and you are not exactly sure what that dude is doing.
I mean you could know but then you would look like a pervert if you turn around and he is undressing or dressing or even worse ... nude.
Then you are staring at his bunghole or even worse ... his penis.
A dude looking like he was checking out people's junk is not the best way to become the popular kid.
Your eyes were staring straight ahead and focused on your locker like you were Luke Skywalker readying to fire his proton torpedoes at the exhaust port to destroy the Death Star.

I had the misfortune of being near the locker of a guy who was a pretty healthy boy if you know what I mean. Besides shopping at the husky section at Sears, he also got quite sweaty during PE so he was one of the few that spent more than a few seconds in the shower.
He was also for some reason not ashamed of his body.
He would walk from the shower naked and then hang out in front of his locker room dripping water and letting it all hang out.
Yes it was as awful as it sounds.
Then he made it even more awful.
Have you seen one of those National Geographic specials where a big old bear comes out of an Alaskan river and shakes himself dry? 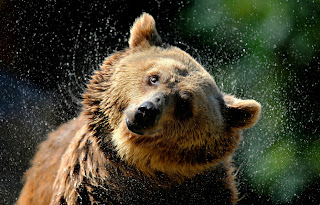 I guess furry mammals can shake themselves 70 percent dry in just a fraction of a second.
Well lucky me got to witness that awesomeness live as this is what my locker buddy did in our area.

If that wasn't enough to get me to throw blows, he also had the wonderfully pleasant habit of rubbing his bare, wet ass on my back. Again there is not a lot of space in the locker room especially when you are changing your clothes and trying to get ready for your next class. At this point I don't think it was on purpose. He just did not realize how much space his rear end occupied.

I politely asked Chub Chub to knock it off because I really did not enjoy snuggling with his butt and that the last time I checked I was not a yellow hibiscus that was in desperate need of water.

For a long time everything was cool between us, but all good things must come to an end.
I am not sure what set him off. If I had to wager a guess I would say it was probably me being a jerk and making fun of him outside of PE class.

Plop. Plop.
I heard the big sloppy, drenched footprints heading my way.
Plop. Plop.
But we were cool.
There is no way he is going to.
Right?
Wrong.
He jiggled himself dry like a pregnant hippo that just hopped out of Lake Tanganyika.
Then I felt it again and I certainly had not missed it.
A super-sized absolutely nauseating version of a wet willie.
A wet, hairy butt sliding across my bare back.
I was just sitting on the bench in my towel getting ready to put my clothes on.
Now I was just assaulted by someone's completely saturated buttocks.
I was beyond pissed.
I just jumped up and started punching.
He was naked.
I was naked.
We were recreating scenes from the HBO show Oz before anyone knew about Oz.
He got a few shots in and so did I before we were separated and told to get dressed then head down to the principal's office.
If the fight had to go to the judges I think I would have won a majority decision.
Chub Chub was without a doubt shocked that I went after him because it just wasn't my personality but he never, ever tried to pull anything like that with me again.
Every man has his breaking point and I found mine that day: keep your wet, hairy buns to yourself.