on April 26, 2013
Four hours on a Friday night.
Five friends taking a trip down memory lane.
Telling stories, sharing laughs and enjoying a few beers.
It was something we have done numerous times but this time it was different because we did not know if we will ever get this opportunity again.
It was never mentioned but I am pretty sure each of us at the table thought it.
“Will this be the last time we see our friend alive?”
He was diagnosed with Stage IV cancer on Wednesday.
The doctor told him he has 50 percent chance to live to see 2014 with the chemotherapy treatment. Two days later we met him at a local watering hole and gave him what he wanted: lots and lots of stories.
He just wanted to hear and talk about the good old days we had while we were at college. To remember all of the stupid shit we lived through and were lucky enough to still recall.
It was a good time despite the circumstances.
We were locked in. Ignoring the wall of TVs, the classic rock, and the other customers.
Just focused on our table and contributing our funniest stories and memories from what seems like a lifetime ago. Talking about the fun we had when we were much younger and life was not as complicated.
We were not worried about mortgages, our jobs, our relationships ... anything for those four hours.
We were just in the moment and we wanted it to last forever.
But we knew it couldn’t.
Unfortunately, life does not have a pause button.
However for those four hours on that Friday night we were all back in school at the University of Idaho. Nobody had been divorced, nobody hated their job, nobody hated their situation, and nobody had cancer.
But it had to end. We had to go back to reality.
We would wake up tomorrow with hangovers and the daily grind of life with all of its worries would return, but for this one single night we went back in time and just reminisced about how much fun we had, how much life we had lived, and how much we loved our friend.
Stay strong Jeff, and kick cancer’s ass so we can have another four hours on a Friday night sharing laughs, enjoying a few beers, and making some new memories. 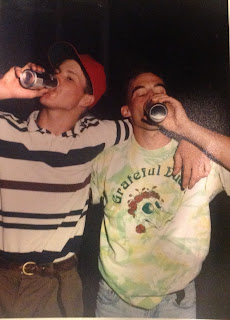 This is a picture of me and Jeff. I thought it was a good one because he and I both studied hard but definitely enjoyed our free time at school, and to us that usually meant drinking some beers. And if anyone has a clue where I can get a Grateful Duck shirt I will owe you big time. It was one of my favorite shirts from college and I have not been able to find one since I graduated.