on March 06, 2013
I give you these eloquent and powerful lyrics from "Bye Bye Bye," which besides being my go-to karaoke jam, is a song from the Backstreet Boys 'N Sync:

Bye bye
Don't really wanna make it tough
(I don't wanna be your fool)
I just wanna tell you that i've had enough
(But i've had enough)
It might sound crazy but it ain't no lie
Bye bye bye
(Bye bye!)

So why am I starting my blog off with lyrics from a boy band? I will explain soon but I first must apologize as I will have to get back to that big confession in that opening sentence later as there is not enough time today to discuss why I am compelled to sing Backstreet 'N Sync at karaoke bars.

Back to the story.
I thought of those words as kind of a theme song for Kyle as he made a really big decision recently. I am rather embarrassed to admit it but the little man was still going to bed with his pacifier or binky as we call it around here. Mrs. Shife and I knew it had to stop as he is going to be 4 soon and we were thinking of clever ways to persuade him to let go of the bink.

So I planted a thought.
I mentioned to him a couple of months ago that binkys start to taste funny when you get bigger because that is what happens to big boys. Occasionally I would ask him if the binks were OK and Kyle would let me know that they were not tasting funny. I also told him that when he was done with his binks that we could take them to the toy store and he could trade them in for a new toy. My plan was to put some anti-nail biting cream on his 2 remaining binks after his 4th birthday so they would taste funny and hoping it would make sense to him. I was not looking forward to this day because I did not want to put some nasty stuff on Kyle's bink because that just felt cruel but I also knew we had to take the bink away.

Fortunately it never came to that as Kyle decided one day at dinner that he did not need his binkys anymore. I honestly don't know what triggered it but something just clicked with him.
He told us that he did not want them to start tasting funny and was ready to take them to the toy store to trade it in. Off to Toys R Us we went. Mrs. Shife and I were looking at each other on the way to the store like "Is this really happening?" and then "OMG I can't believe this is happening. I think I just peed my pants because I am so excited. Did you pee your pants?"

Well he picked out a toy, we came home and everything was fine until bed time. Then it dawned on Kyle what he really did and he started getting upset. Mrs. Shife and I are trying to comfort him while not laughing because the stuff he was saying was hilarious. He kept saying that he was worried about his binky being OK and that he needed one because he had dreamed about them his whole life. He is a funny little dude.

Eventually we calmed him down, and the first night was pretty rough. The second night was a little rough, and the third night was no big deal. Fast forward to present day and he is just fine as you can see by the picture below. 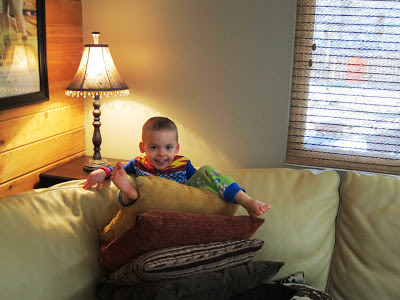 P.S. I also would like someone to contact the record books because I think I set the record for using the word bink, binks or binkys in a blog post.