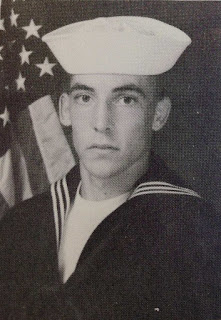 How is that for an attention grabber? And why would I remember this? First off I do not have a list stashed away in a tattered notebook ranking my best and worst wet dreams, and you will easily understand why I remember this as my worst dream ever after reading about what and where it happened.
So let me set the scene. I was a 19-year-old man living in Orlando, Florida and employed by the U.S. Navy. However, I had only been working for the Navy for about 6 weeks when the incident occurred so if you know how the military works and do the math then you know I was in boot camp.
Yep that is right. Me and 80 of my closest buddies sharing a barracks with 2 of the meanest people I have ever met in my life also known as company commanders or drill instructors, CPO Cunningham and CPO Shooks. I found out after boot camp graduation that the meanies were actually awesome folks who were just doing their job.
During boot camp there is not a lot of stuff in your control. You sleep, eat, exercise, listen, march, shower, poop, pee and think when they tell you to. My company was nearing the end of boot camp. I think we had 2-3 weeks to go so we were able to do some things that we never imagined doing after our first week at Recruit Training Command in Florida. Now we were able to take care of our chores in a fairly quickly and still have enough time to sit down on the floor, lean against the wall and take a quick nap. Well yours truly decided to do that after I got my bunk squared away and mopped the bathroom or the head as it is called in the Navy as that was my menial task I was assigned for the week. We probably had 15 minutes before we were going to eat or do a drill so I thought I would close my eyes for a few minutes to recharge.
Did I mention I was 19? 19-year-old boys are often referred to as young, dumb and full of that stuff that looks like tapioca pudding. I also had been away at boot camp for an eternity - hey 7 weeks is a lifetime to a teenager - with no release for that stuff. I was going to die. I swear I saw a headline or a news story somewhere that said a teenage boy spontaneously combusted because he was too full of sperm. One guy got caught masturbating during boot camp and his life was a living hell after that so there was no way I was going to take that chance.
Anyway I am napping away and I was having a really, really good dream. I guess the boys needed to deploy and they saw this as their opportunity. Before I realized or understood what had happened I woke up, stood up and then looked down to my worst nightmare. I just had a wet dream in my Navy uniform and there is no hiding the evidence because it is all over my pants. I am freaking out. Our drill instructors are about to walk through the door at any moment and we are going to march somewhere and I will be strutting my stuff with soiled dungarees. That is of course if I can make it out of the door without no one noticing the large stain that looks like a map of the Hawaiian Islands on the front of my pants.
I walk as fast as my petrified body will take me to the bathroom and try to clean up as much of the mess as possible. Toilet paper and water are great for some things but cleaning up my DNA is not one of them. Now the stain has morphed into Southeast Asia and with tiny pieces of TP stuck to it.
I just kept thinking I am so screwed. What I am going to do? I am running out of time. I am already Seaman Shifley now they are going to call me Seaman Spluge or something else horrible for the rest of my Navy career.
Desperate times call for desperate measures. It was time to use the mop again. It was still wet and I don't know if you heard but mops are good at cleaning up stuff. So I started mopping myself. Rubbing that nasty, moist mop all over my pants and shirt. Just getting as messy and wet as I could. As I eyeballed myself to make sure there is no way anyone will know I spontaneously orgasmed in my pants just a few minutes ago, I headed back out to my bunk area to face my punishment.
The drill instructors had just strolled into the barracks when we had to line up for an impromptu inspection. They got a look at me and wondered why I looked like I just got assaulted by a water buffalo. I told them I slipped and fell while I was mopping. They knew I was hiding something and proceeded to verbally pummel me for a few minutes to try get to the truth. I stuck to my story and didn’t blow it like I did earlier. It was always a great time getting your butt chewed out by them. I tried to view it as an educational experience as I got to learn how the f word can be used effectively in so many ways like a noun, a verb, an adjective or an adverb. I had to do some push ups, change my clothes and eventually they moved on to abusing another sailor about doing something stupid and that is the tale of my worst wet dream. And sorry for lying to you CPO Cunningham and CPO Shooks but I just could not be remembered as Spluge.
Thanks for stopping by.