on March 13, 2013
Thanks everyone for your comments. It really does help.
I don't know if it was eating 4 cinnamon rolls, nearly an entire sheet cake, going on a Mountain Dew binge, telling Tobias to eat a barrel full of duck vaginas or if the doom and gloom had just finally peaked, but I am feeling much better today.

Today Kyle and I worked on one of Mrs. Shife's birthday presents so we were quite busy at his art table being as artistic as we could be. He is 3 and I am not but my art skills are about at that level.
I am definitely not  known as an artisan.
I have mastered many skills but creating something like functional furniture or making a tapestry of the Norman Conquest of 1066 is not on my resume.
After a few beers I like to think that I can do these things and I actually have tried my hand at building stuff before after downing some liquid courage.
I remember one time in college attempting to build some shelves. I built - really feel ashamed for even using that word - them and before I went to bed I thought to myself that I did a pretty darn good job.
It turns out beauty definitely lies in the hands of the beer holder.
When I woke up, I realized I had not built shelves but I constructed a deformed, misaligned, distorted, twisted pile of wood that would send a Great Slaty Woodpecker of Southeast Asia into immediate cardiac arrest if his beady eyes caught a glimpse of this hardwood horror show.
So where am I going with this? Well I was remembering this story as Kyle was hard at work on his momma's present. When he was done with her present, he decided he wanted to draw some more so he drew some more. When he finished, he wanted to hang up his art on the fridge. Off he went into to the kitchen and I came in a few minutes later. What I saw made me belly laugh and love my child even more than I possibly could.
And I swear to you I did not alter this photo at all or pick out his magnets.
I don't know if he picked up on my brain waves but whatever the case might be it appears the apple does not far fall from the tree. 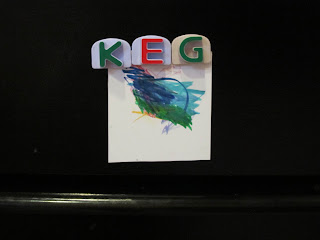 And if you ask me I believe that he attempted to draw a picture of a woodpecker.