Then we thought maybe some food got left behind by us or one of the kids that was hidden away under a seat. Nope not it .

Then maybe it was the diaper bag and we accidentally left a used one in there. Nope not it.
Turns out Hayden's sippy cup dripped a little bit, and some milk ended up underneath a car mat. So the milk would constantly freeze then warm up until it just smelled awful. Like a turd covered in burnt hair as someone eloquently said on "Anchorman." Below is a picture of the guilty party. 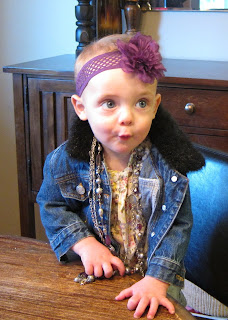 Who me? I would never do anything like that Daddy. Quick buy me some more jewelry.

That is all. Have a nice evening.