Take A Chance On Me

on April 26, 2012
For those of you familiar with the ABBA song referenced in the title, I apologize as I know you might have trouble getting that song out of your head.
So it has happened again, I have turned another year older. It certainly beats the alternative and it is nice breaking my days alive streak again.
As I approached this milestone, I found myself thinking quite a bit about being this old. Is there where I thought I would be at this point in my life? Honestly no. I never thought  I wanted to be married, I really never thought I wanted kids, and I really, really never thought I would be at home all day taking care of babies. Fortunately, fate, chance, destiny, or whatever you want to call it thought otherwise, and here I am.
I also realized how often I have lived my life by taking a chance. Hoping that my instincts were right and that I had embarked on the right path.
After I got out of the Navy when I just turned 21, I was still unsure about a lot of stuff including what to do with my life. I literally and figuratively had no clue as to what I wanted to do. I almost joined Army, I almost moved to Las Vegas, I almost went to a small college to play soccer, but then I watched "Animal House."
I knew what I wanted to do.
I wanted to party, and I wanted to be in the Greek system. That is all it took to convince me to go to the University of Idaho. I then joined a fraternity, and if it was not for me trusting my instincts and taking a chance, I have no freakin' idea where I would be right now.
Without the fraternity, I would not have met some of my closest and dearest friends and I would not have met my lovely wife. Taking a chance on love, I decided to forego film school to see if she was the one, and it turns out she was most definitely the one. And without the lovely Mrs. Shife, I would not have two babies that I love with all my heart and that have changed me in such profound ways.
Trust me, I have also taken chances that have not been so fruitful and led to some painful lessons learned. But in the end, all of the chances that I did take were leading me down a grander plan that I could not even comprehend.  As Garth Brooks once sang, "Yes my life is better left to chance. I could have missed the pain but I'd of had to miss the dance." 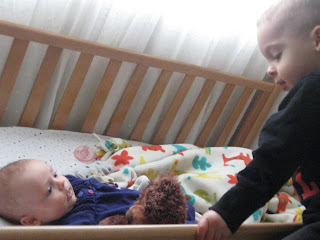