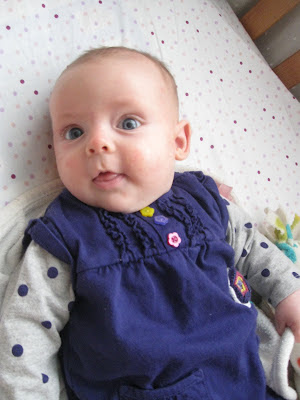 Highlights from the Rookie Dad Journal:
January 8 - 7-weeks-old today and she is already wearing 6-month-old clothes and sleeping through the night ... whose kid is this?

January 9 - Kyle can now toot on command. He is proud of this fact and the giggles that it produces when he does it.

January 14 - Just amazed sometimes as I watch Kyle talk and play because he is transitioning from a toddler to a little boy. Glad I get to spend so much time with him and see all of this happen.

January 20 - Starting to write down ideas for what to get Kyle for this 3rd birthday and right now it is hockey sticks, a Bulls jersey, and a new desk. I am pretty sure this list will change by the time his birthday rolls around.

January 26 - Bought Kyle some detangling conditioner for his hair. We put it in and boy, oh, boy, does someone have a lot of curls. Don’t know if he will keep them but right now he has head full of curly hair.

February 7 - If I had to pick today what Kyle is going to grow up to be then I would pick a chef. He loves making stuff. He doesn’t want to eat it but he likes making it.

February 8 - Hayden has mastered the art of smiling. She just knows when she does it she can get whatever she wants.

February 10 - Both of the kids slept in until after 8 in morning. It was awesome.

February 16 - Serious potty training has begun. We are motivating Kyle with the “Cars” movies. When he goes potty he gets a sticker, and when he gets 5 stickers then he gets to watch “Cars.” He got four stickers today.

February 18 - Sarah finally got tired of Kyle’s wild hair so he got it all chopped off this morning and looks like he is ready for military school. It does look a lot better.

February 22 - We welcomed to Diego to the cartoon rotation as Kyle is a big fan of “Go Diego Go.”

February 23 - We have decided we are going to live to fight another day with Kyle’s potty training. He just doesn’t seem to be ready so we will try again in a few weeks.

March 1 - Hayden thought she would start out March by rolling over. It is just the beginning.

March 2 - Now Hayden is starting to laugh and I think next on her to-do list is crawling. I am not ready for that. Nope. No way.

March 5 - Hayden’s 6-month-old clothes are starting to get a little tight. I can’t believe this is my kid.

Thanks for stopping by. Talk to you tomorrow.