A Blast From The Past

on March 10, 2011
It has snowed and rained all week here in Idaho, and I am tired of complaining about it so I have resorted to dreaming about sitting on a beach near the equator. The fantasizing made me think of my last trip to Mexico and a funny story so I shall share it again since most of my current readers were not aware of Mr. Shife yet. Enjoy.
Mrs. Shife and I spent 3 days south of the border in Mexico and during those 72 hours I ingested quite a few things that after being shaken, stirred, and processed in my belly were ready to take their final journey home to the big sewage plant in the sky. 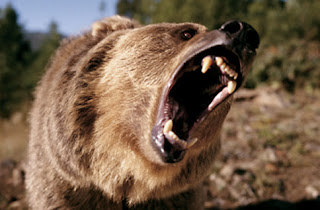 So I wake up Sunday and there is a raging bear in my butt. I mean he is growling and ready to be exorcised. Everything's cool because the condo we rented with friends was spacious enough that Mrs. Shife and I have our own bathroom so if I need to create some lawn sausages we should be OK. And I have matches. My first and only travel tip, don't forget the
matches.
I am up, I say hello to my little friend (He is always up way before me), and noti
ce that Mrs. Shife is looking puzzled. She informs that there is no water (The Mexican town we are at has to truck in all its water and since they are right next to the ocean it is a little ironic) and no electricity.
This is not good, I say, and meanwhile, my bottom is growing more and more antsy. Well, I alert the colon warriors of our unfortunate surroundings and they lock down the hatches and submerge. It is like a scene in a submarine movie when the sub is cruising on top of the water and then all of the sudden the enemy appears. Everyone heads to their battle stations and the sub immediately dives back into the ocean.
Anyway, let's move forward. I tell Mrs. Shife we need to hit the road because I don't know how long I can make it sitting on these butt kabobs. So we load up our sexmobile, the 2006 Ford Taurus rental car, say our goodbyes, and begin the run for the border. Now I know what you are thinking, why not stop in town and take care of business? Well I have been in town and seen the banos, and let's just say I would rather crap my pants than take my chances with one of the local restrooms. Plus, this was the morning after a concert where there were about 4,000 drunken gringos drunk in town, and the last time I checked the sanitation of the bathrooms is not a high priority in third-world nations.
So it is about 60 miles to the border and as we get closer and closer it is becoming more apparent that I am racing the clock. The colon warriors send me a message, "We are giving her all we got, Captain." I was surprised as well to know that poop was female.
Mrs. Shife suggests that we pull over and I go outside in the desert. I thank her for the suggestion but remind her of my fear of pooping outdoors.
Let's us pause for an amusing but traumatic anecdote. Several years ago I was helping a friend with his crops, and it was a carrot field. Well in southern Idaho they use bees to help pollinate the crops and stuff so there are literally thousands of bees in the crop fields. Well, we are nowhere near a toilet and I am doubled over in pain so my friend tells me to just go in the field. So I do, and evidently, human poo is a big hit with the bees because I was in the middle of a swarm right after I began my movement. I am hurrying up to finish and swatting away bees at the same time. I finally finish the deed and as I am wiping I get stung right in the neck. So I jump up screaming several dirty words that would make sailor proud and try to pull up my jeans while I am running from this swarm of bees in the middle of a carrot field. So I don't like pooping outside.
Back to the story, we hit the border, and I am having hot flashes and sharp pains strike my stomach intermittently. The line to get across was not too shabby, so we are in the US of A. But there is nothing really on the American side that I believe would make my current situation a favorable experience so we have to wait for the first border town which is another 30 miles.
Holy Crap! Mrs. Shife is starting to get concerned because I explain to her how I am feeling in terms I believe no one has ever used before. I can't verify this information but I feel strongly that I am the first to describe my predicament in the following way. 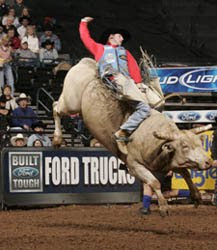 I told my lovely wife that you know at the rodeo when they put the bull in the pen and get him all fired up, then they stick a cowboy on top of him and then the bull is really fired up. He is ready to come unglued. He is pissed. He is ready to come flying out of the gate and do some damage, and it takes all the cowboys and rodeo clowns to hold that gate down until the cowboy on top says he is ready. Well that is basically what is going on with my rectum. I have bull in the pen and he is ready to dance.
Well, to make a long story less long, we pull into town and I race into the bathroom. And it is occupied. I wait and wait, start doing a little dance because we can longer abort the mission. And dancing like a dumb, white guy is an excellent way to distract the bull in the pen.
Anyway, the dude finished up, I think he wanted to have a dance off, but I said I had a turd honking for the right of way. Maybe we can dance later. And then I William Shatnered (also known as pooping) and the world was right again.
Yay me!
And here is a picture of Kyle doing what he does best ... being adorable. 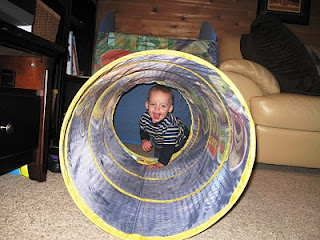