on May 16, 2010
It is safe to say that May has not been a very productive month for this blog. It is a combination of post-40 blues and general apathy. I might hire a horse to give me a swift kick in the butt to see if that gets me going in the right direction or maybe I will just have Elvis fondle me again. It is definitely going to be erratic for the rest of the spring and summer because me and the family will be busy enjoying festivities that accompany the warmer weather like vacations, weddings, get togethers, sporting events, vasectomies, and overall laziness. OK one of those items is false but I just wanted to see if you were still paying attention. So what are you looking forward to in the next few months?
Talk to you later, and I guess it is about time I shared a new picture of Baby Shife. Here he is after he had a battle with some chocolate pudding: 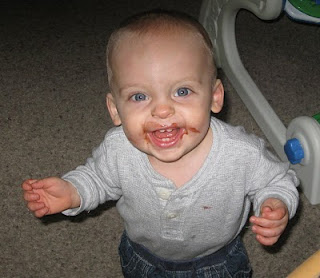