on April 09, 2010
This post has little to do with me turning 40. It is more about the other old man that I live with, Quincy the 12-year-old fat basset. He has been neglected on this blog since Baby Shife arrived on the scene more than a year ago so I decided to share a new photo of Captain Furry Pants. There are so many things wrong with this picture that I am not sure where to start. Do I begin with him just being on the furniture or the fact that he has his furvaceous body spread out over so many pillows or that he needs to be on the pillows because the leather couch is not just comfy enough for him?
The picture was taken two nights ago at about 11:55, and Mrs. Shife and I still have not figured out what he was doing.
Baby Shife was having a rough night. He was crying and screaming so Quincarelli might have just wanted to get away from the noise so he went to the living room to get some sleep or he was trying to blend into the couch with the white pillows so we would not find him or he was covering his ears with the pillows to drown out the noise or he was just being a crazy basset.
Feel free to add your own interpretation.
Have a good Friday. Talk to you tomorrow. 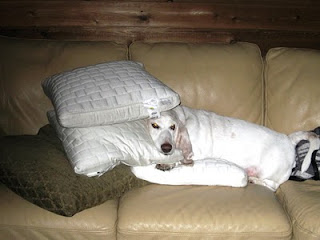