on January 13, 2010
December 1 – Daddy daycare goes into lock down. The first child safety gate has been installed in the house. I give the gate about 7 days before the wildcat tears it a new one.

December 2 – It took Baby Shife about 2 seconds to change the voice mail greeting on the phone, and then it took me about 10 minutes before I figured out how to change it back to our normal message. Good times.

December 3 – Baby Shife and I went to the mall to get a start on our Christmas shopping.

December 4 – Nothing like being greeted in the morning from a visit from the mud butt fairy. Baby Shife thought it would be fun to test to the holding power of his Huggies and my son’s poop won.

December 6 – We are getting the Christmas tree today. How long the tree survives in the house will be the key as I am sure Baby Shife will be plotting his strategy on how he can get his little hands on all of those shiny ornaments.

December 7 – Somebody has learned how to make themself taller. Baby Shife has been climbing on top of some of his toys so he can get to these things higher up on the shelves. You know stuff that he is not supposed to get into.

December 8 – I watched him stand up all by himself in the middle of the kitchen for about 5 seconds. I think he could have lasted longer but I think he realized that nothing was supporting and kind of had a “Holy Cannoli” moment and fell down.

December 10 – Another blowout on Interstate Baby Shife. There was mud all over the road. Not a pretty picture.

December 11 – Baby Shife and I sat down and had breakfast together for the first time. Usually I just feed him but today he nibbled on Cheerios and a rice cracker while I had a breakfast sandwich and some hot tea. The conversation was a little one-sided but it was really nice to sit down with my boy and enjoy the morning.

December 12 – I definitely had Baby Shife withdrawals today. He went over to his Aunt’s house at 1 and he came home about 6:30 but I was out running errands and when I did get home he was already in bed. So I will not get to see him until tomorrow morning when he gets up for the day. I miss my baby.

December 13 – Baby Shife got to experience the madness of Christmas at the mall. It actually isn’t that bad when you have a stroller and just push your way through the crowds. For the most part people get out of your way.

December 14 – Baby Shife needs a better high chair. The current one does not have much of a tray and so most of the sweet potato puffs and Cheerios he tries to shovel in his mouth end up on the floor which makes a certain husky basset very happy.

December 15 – I went back to Toys R Us and decided to return Baby Shife’s Christmas presents and get him some different stuff. He also got a new high chair with a better tray that seems to work out better when he is enjoying his Cheerios. The fat basset is a little disappointed because not as many Cheerios are plunging to their death and into his mouth.

December 16 – In the last 5 years before Baby Shife arrived on the scene I could probably count on two hands how many times I had been to Wal-Mart and Toys R Us. Now I swear we hit one of those places at least weekly. Amazing how things change when you become responsible for a little person.

December 19 – Baby Shife went out to dinner with us and Aunt and Uncle to celebrate her graduation from college. He polished off 2 rice crackers and made everyone giggle with his laughs.

December 20 – Baby Shife might have made his first joke today. He was playing with Quincy’s tail and I told him to be careful of the fat basset’s muffler because it was yucky. Then immediately we heard the little man say something that sounded an awful lot like “No Da Da’s Is.” It might have been complete baby gibberish or he could have been ordering Chinese but that is what Mrs. Shife and I thought we heard.

December 21 – Baby Shife pointed at me today while Mrs. Shife was holding him. It is the first time I have seen him to do that.

December 22 – Baby Shife sported his Santa outfit and went to Mommy’s company Christmas party. He was voted most adorable. I think he also picked up the stinkiest diaper award.

December 23 – I don’t know if it is a coincidence or not but ever since I let Baby Shife play with my Blackberry they have been having problems with their service. Never underestimate the power of Pampers.

December 24 – Baby Shife sat on the piano bench and banged on the keys for a few minutes. He seemed to like it but then again he also likes shoving Quincy’s tail into his mouth. And we got to wrap up the little man’s first-ever Christmas presents.

December 25 – Merry Christmas. Baby Shife didn’t take much interest in his presents until after they were unwrapped and available for his entertainment. All in all, baby’s first Christmas was very low-key and not too exciting which makes it just about perfect.

December 26 – Santa also decided to give Baby Shife his first rug burn. He was playing with his new dump truck and it got away from him as he was hanging on. So the little man picked up a nice little holiday memento on his chin when he fell on the carpet.

December 28 – I don’t think Baby Shife has touched the floor since everyone has arrived.

December 29 – You know what they say about best laid plans … well we had a family portrait planned at 4 but somebody decided it was nap time and slept through it. We finally had to wake him up so we could the picture taken before it was too late.

December 30 – Captain Caveman made an appearance today. He ripped out one of his crib slats this morning and was playing with it in his crib after his nap.


Here is a picture of somebody in a new fancy sweater he got for Christmas (he thought it went well with the bruise he picked up on his forehead), and here is a link to his 9-month-old-video if you want to see the little man in action, http://www.youtube.com/watch?v=JlklhHDO77k 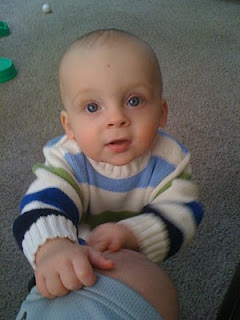