on January 20, 2010
I am not sure if it is evident or not to those who visit my blog but sports - playing and watching - are a big part of my life. Sometimes my competitive nature gets the best of me when it comes to sports and I get a little upset if my team loses or if I have a bad day at the ball field. Well I had a dissatisfactory day recently watching one of my teams play and concluded enough was enough. I decided to take a break from watching sports for a bit. It hasn't been as bad as I thought but I didn't completely comprehend how much sports I watched until nothing was on TV. So this past weekend I decided to watch a movie or 10. And yes I do have a bit of an obsessive-compulsive thing going on. I had to make it 10 because that was a nice even number.
So to borrow from my blogging buddy Dr. Kenneth Noisewater, please tell me dear readers about a motion picture you have seen recently? Or you can just tell me how much trouble I am in when the little dude starts walking? It should not be too long before he is moving by advancing the feet alternately so that there is always one foot on the ground in bipedal locomotion.

And here he is taking a ride in his dump truck. I love that smile and I just wonder how much it is going to cost me at Toys R Us when he is older. 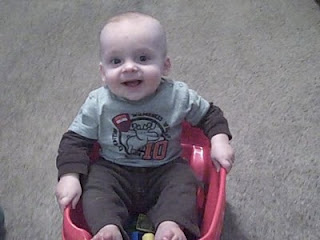