And here is a picture of the 8-month-old baby boy showing off that sweet smile ... 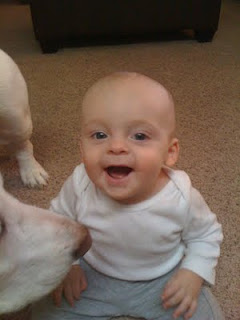 P.S. Sorry but I had to turn on the word verification for comments again because I have been getting bombarded with anonymous comments on a lot of my older posts. Hopefully this will keep them away and I can turn it off after a bit. Thanks for your understanding.