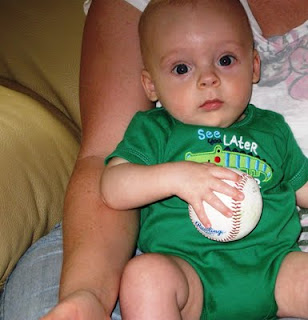 I actually do keep a journal of the highs and sometimes lows of my days with my little man. Some of the entries do not deserve to see the light of the day but I thought some of my wonderful blogging buddies might find a few of them entertaining so without further ado I present some August posts from Mr. Shife's Rookie Dad Journal:

August 1 – Baby Shife went downtown to the Basque Block and spent some time at the San Inazio Festival. He also got to go inside his first bar at The Basque Center. I tried to talk him into doing body shots off Mrs. Shife but he passed. And at least they did not kick him out of the bar like Chili’s did.
August 3 – The highest of highs, the lowest of lows. Baby Shife can smile at me and I just love him more and more which makes you feel pretty special. Or he can be sitting in his car seat and you leave the room for a minute and come back to find an empty car seat. He base jumped from his car seat on the kitchen table onto the floor. He was a little upset but there was not visible damage, but I just felt like a terrible Dad.
August 4 – Do not bounce, stimulate, excite, or fire up the baby up just after he has finished eating. You can expect the milk he just ate to come back up a few minutes later all over the floor. This method would be great if we were trying to herd some cats but not advisable if you want your child to keep their food down.
August 5 – He has rolled over before but today I got to witness it firsthand. Pretty cool watching the little dude grow up and start to do things. It also means I need to keep an eye on him at all times if he is in a place where he can roll off something and onto the floor.
August 6 – Captain Mud Butt made a visit today. Not a pretty sight in Baby Shife’s crib.
August 7 – Baby Shife is back on the road again as we are going to Grandma and Grandpa's house for the weekend.
August 8 – Baby Shife got to meet some new people and got a lot of new presents.
August 9 – Back on the road again. 7 hours later and the tally is two visits from the mudbutt fairy, a fussy baby, and tired and grumpy parents.
August 10 – Rookie dad mistake: When using the bulb syringe make sure you clean it out away from your child’s mouth. I was trying to blow the bulb’s contents into a tissue and missed, but it dropped right into Baby Shife’s mouth. I am sure it will not be the first time he eats his own snot but he did not need any help from me.
August 13 – Rookie dad mistake: If you are going out in public do not put on your public wearing outfit until after you have fed your baby. I just changed into my gear and then fed Baby Shife and then Baby Shife puked all over me.
August 14 – Baby Shife discovered the power of his thumb today. So if he learns how to walk then I am going to have make sure he doesn’t become a little hitchhiker.
August 18 – It may have been a coincidence but when I went to pick Baby Shife up this morning he reached out his arms as if he was saying pick me up Daddy.
August 20 – Automated phone systems evidently do not understand baby talk. I was on the phone with Sallie Mae with Baby Shife crying in the background and the phone system disconnected because they could not understand my responses. So do not talk to automated phone systems with a baby crying in the same room.
August 24 – Baby Shife is developing quite the death grip. I will have him lay on my chest and he will grab my cheeks and try to eat my face. I think he is trying to give a kiss. Or he might be a cannibal.
August 26 – I think Baby Shife thought about putting in his adoption papers to find a new Dad after watching me play softball today. I was awful in front of my son. He looked like he was napping but I think he was faking it so he didn’t have to watch me play anymore.
August 28 – B aby Shife went to the office today to put some hours in with Mom. He also is making a habit of sleeping on his chest now, and it is just really weird seeing the little man sleeping that way. He still looks like a little angel.
August 29 – Went down to the Greenbelt and tested out Baby Shife in his jogging stroller. He seems like he will do just fine when he is all strapped in so we are good to go with our new personal trainer - Baby Shife.
August 31 – Baby Shife closed out the month by spending a few more hours at Mommy’s office. He didn’t close any deals but he definitely brought productivity at the office to a screeching halt. He also turned 5-months-old. Hard to believe.