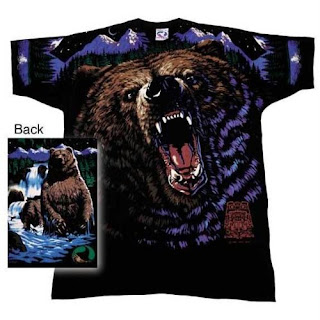 Bigger than Ninjas vs. Pirates. Coke vs. Pepsi. Top vs. Bottom.
More important than health care reform (probably not, but just work with me here).

My blogging buddies what you are about to read is the next great debate that will eventually take the world by storm: Should I wear a bear t-shirt or a wolf t-shirt?
I was strictly a wolf t-shirt man but a humble and wise man from parts unknown made me see the light and realize how wrong I have been about bear shirts. 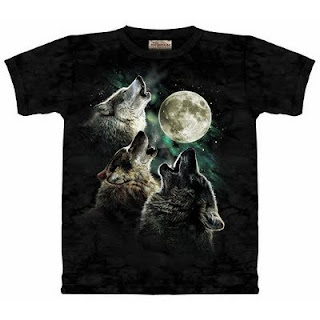 I used to be a wolf shirt guy, until I discovered bear shirts. Bear shirts are much more mystically powered and attract an even more powerful woman. Even a woman wearing a bear shirt can attract a more powerful woman. A man wearing a bear shirt (bear-shirt-man) is held in such high esteem that most in the area are too intimidated to approach or even look at bear-shirt-man. Most of the time, they try to pretend bear-shirt-man isn't even in the room. That pays dividends when bear-shirt-man has attracted a particularly good wants-to-be-with-bear-shirt-man-woman. These women can usually be described in excess of 5 feet, 10 inches, a good quality weight that won't be pushed around in a tornado, a generally attractive fe-mullet hair style, saddle-baggish thighs, ability to slam crush beer cans with their hands, and the capacity to spit non-menthol snuff at least 10 feet. These hot mamas have been known to spend their time working as repo trucks drivers or lumber jills. The benefits of bear shirt are neverending. For example, when you wear your bear shirt to the diner you can count on getting the best table by the kitchen where your food will be hotter when it gets to your table than the poor wolf-shirt-men who has to sit up by the bar where the skanky ladies hover. At the oil change place, bear-shirt-man doesn't even get asked if he wants to change his 'air filter' or 'johnson rod'. Oil-change-place guy knows that bear-shirt-guy knows what the hell he's doing and won't fall for some eco-scam about oil recycling. Bear shirts rule. I once saw a bear shirt eat a wolf shirt.

There you have it folks. Simple math, Bear Shirt > Wolf Shirt.
Are you convinced? Are you a wolf shirt or a bear shirt?

And I didn't forget your weekly fix of Baby Shife. Here you go: 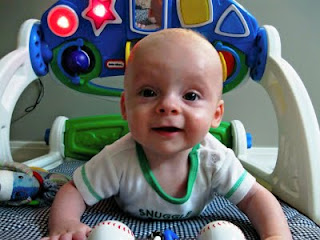