on May 26, 2009
Stardate 052609: Day 1 of being held captive by a 2-month old baby.
Mrs. Shife went back to work today so it is just me, the fat basset, and Baby Shife.
All in all it was an OK day.
We got up about 7:30 and played for a little bit.
Then he told me he was hungry - for a two-month old he is a very effective communicator - but the methods I proposed for satisfying his hunger were unacceptable to Baby Shife.
I offered a bottle, and he counter offered with a meltdown.
This battle of wills went on for the next two hours.
Each side plotted their next move carefully but no progress was made.
Then a wise old man made a suggestion.
Sometimes referred to as Captain Furry Pants, the wily old fat basset realized his nap time was getting cut shorter and shorter as this senseless war of the Shifleys raged on so he offered to help.
And then suddenly my son was willing to take the bottle.
It is amazing how a 55-pound hungry dog can so easily influence a little dude. 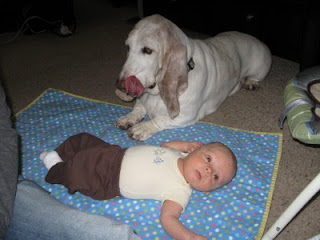