He ate a flippin' snake

on September 26, 2005
I saw some things this weekend that I will be haunted by for a long time. On Friday, I went to a bachelor party for a friend of mine and it appeared to be a normal party. Lots of beer, booze, cards, food, etc. But then it happened, it would be the jar of vodka that was broken out. There was something special about this vodka. First it was from India and second it had 4-foot-long King Cobra snake fermenting in the vodka. This would be India's version of the tequila worm.
I did a search on the web, and the best thing I could find was this link, and here is a photo from the Internet but I don't know who those people are. I have n 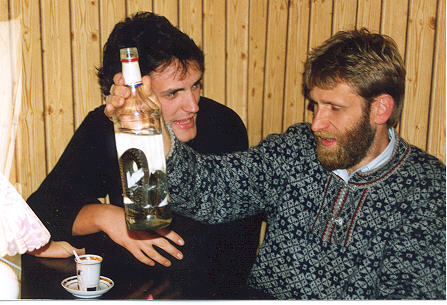 ever seen a King Cobra before, and I sure as shit have never seen one in a giant jar of vodka. Fucking wild shit. So the bottle gets passed around but I do not partake because for some odd reason the thought of drinking this vodka is not appealing to me. So as the night progresses, boys will be boys, and someone pulls the snake out of the jar and starts chasing people around with it. I mean the snake is dead so what's the harm, but it is still creepy seeing a nasty, bad ass looking snake coming towards you. Then someone says the fateful words, "I bet you $100 you won't eat that snake." The house is suddenly quiet as everyone stops dead in their tracks to make sure they heard what they think they did. Then, the silence is broken by a "Fuck ya I will." Fueled by liquid courage, the brave soul takes the snake out to the barbecue and cooks the vermin for a good 10 minutes and then brings well-done King Cobra inside for everyone to witness a vile moment I will never forget. He takes the snakes head and just starts eating and eating and eating. It was so gross. But, hey he got $100.
Oh but there is more. Some of the older gentlemen at the party heard that the bachelor of honor did not want adult entertainment and they thought that was a sack of bullshit. So they get on the horn and order some strippers for the evening. Now, I have been to enough bachelor parties to know that one of the keys to having a successful evening is having quality entertainment. And that means doing some due diligence and investing some time to find good strippers. Well the older gentlemen placed their call at 6:30 on Friday evening during the party, and the strippers arrived at 9:30 that evening. So can you only imagine what we saw? I am not going to be a complete pig and degrade this women, but let's just say that should consider a job where are they required to keep their clothes on.
So that was just my Friday evening, and I have some more anecdotes from the weekend but I will share those later.
Have a good Monday.