V is for virgin 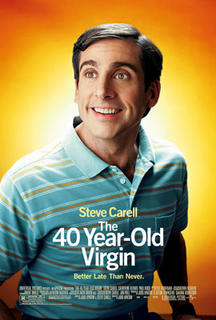 Anyway I won't ruin it for the virgin "Virgins" out there but the chest waxing scene is piss your pantolones funny. I waxed my chest one, and I am no Teen Wolf like Steve Carrell, and it hurt like hell. I felt the pain all the way down to my balls. It actually feels like your chest is being ripped open. I only did it once and I will never, ever do it again.
There is also a great moment with Paul Ruud's character and a video camera and they also integrated a masterbation scene with Lionel Richie's "Hello." You can't go wrong with the L train.

On a more depressing note, "Six Feet Under" ended its run last night. It was a really great episode and gave the fans all the closure they needed. I did not like the way they had Keith die but other than that it was pretty darn good.

And I saw the previews for a new season of "Growing up Gotti," and just watching the 30-second promo makes me want to throw up a little bit inside my mouth. This is another sign of the crumbling society that is Western civilization. I have more taste in my penis.